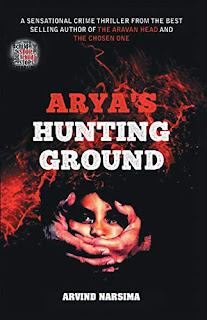 My 19th read of the year and first read of this author is a crime thriller by Arvind Narsima.

I enjoyed it immensely, being my first real crime thriller by an Indian author. I had the uncanny feeling of watching a masala movie on TV, a Telugu blockbuster with subtitles running below. It is a rather large book, but fast-paced and full of intellectual and some physical action along the way.

The novel is distinctly filmy, a Tollywood flick. Seems like the author wrote it to resemble a screenplay than as a book. The movie buff in me enjoyed it thoroughly because it did not compromise on the language, albeit a few minor errors that unlike many other Indian novels, do not take away the experience of reading the book and enjoying it too.

The setting is mostly in Chennai and Puducherry, along with some Hosur-Denkinikottai bits included in it. The various names of roads and places give it a distinct south Indian feel. The climax is perfect for the encounter between the cops and the thugs, offering vivid imagery for readers to imagine the scenes that play out on the pages.

ASP Arya, the super-cop protagonist is larger than life – the perfect sensitive man beneath the hardcore cop. One wonders which Tollywood hero the author envisioned in his mind while penning Arya’a character. Mahesh Babu, perhaps? The tall dashing man who sends female hearts aflutter, wins grudging respect of his seniors and stuns his male colleagues with his exceptional fights. His boundless energy matches his superfast mind while on a case. The fatherly touch is an added bonus to the perfect package. Overall, the book is a celebration of the protagonist – either his own acclaim-worthy acts or the females going gooey eyes over him.

Shivani is the besotted mom who is convincing as weak in the knees for Arya while being a doting mom to Payal. The interactions between the fatherly IG, Shivani and Arya wrt to their children are heart-warming.

Bhairavi is rather predictable and a bit too filmy. The whole characterization of all the antagonists and her interactions with them are heavily dosed with Bollywood, Tollywood and Kollywood undertones. Rudra Guru is a powerful presence, more than the politicians Adhi Kesavan and Prabhakar Reddy. The goons, Blade Rajan, Kathi Kumar and Bullet Bhaskar are as terrible as the sobriquets awarded to them. Jeyanth Nandan the singer, his wife Ananya and even the rowdy Jaya akka have their own roles to play in the plot.

There is a lot of detailing accorded to even the minor characters, especially the foolish group of IT professionals from Bangalore, and most important is the little girl Ahalya. The detailed descriptions of their clothes and behaviour of minor characters does lengthen the book. Also, each of them has specific roles to play to add to the detailing and ambience of the story.

The only problem is the sheer number of characters. There must be more than 30 of them, I stopped counting after the first dozen.

The story is an out-and out Indian masala flick. All the elements are present – the brutality of child rape to betrayal, motherhood to blossoming love, fight sequences to murders and anti-climactic finish. All this, with some suspense and a bank robbery and high-profile murder mysteries are thrown into the mix.

Arya’s quick brain and speedy action is breathtaking to read. The sheer number of people involved and the innumerable processes that run behind the scenes of a police investigation are picturized with flair. Also, the inherent corruption of the police and the criminal-political nexus are showcased in detail.

I liked the portrayal of a young mother yearning for the second chance at love in life. It is time Indians move ahead from the age-old craze for virgin heroines being wooed by playboy heroes. This characterization is a refreshing change, although it is yet to become the norm on screen.

Easy narration and superb vocabulary make this a good read, although it is a long book. Some tighter editing from the publisher’s team would have made this novel even more enjoyable.

Anyone who loves masala Indian movies should not miss this book. I rate it 4.5 out of 5. Extra points for highlighting certain evils inherent in corrupt Indian society while harping on the good over malevolence, with many messages attached to it along the way.

Did my review strike a chord in you? Do follow my blog for more.

Posted by Chethana Ramesh at 02:48