My sixth tribute is to Percy Bysshe Shelley (1792-1822), who was one of the major English Romantic poets of the 2nd generation.

He was regarded as a fine lyric, as well an influential & philosophical poet in the English language.

I have used some prompts from Shelley's Poem, 'The Triumph of Life' to pen my verse.

***
Celebrate 'The Triumph of Life',
dispel darkness, destroy strife;
Get inspired by P.B.Shelley,
pen verses of verve, in a volley... 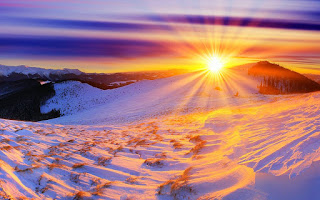 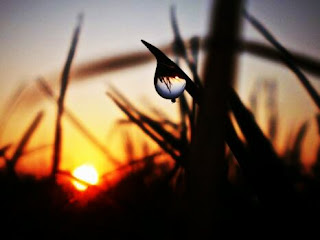 An awakened earth shrugs off her icy shroud,
and welcomes the kiss of day with flair;
Famished nestlings chirp clear and loud,
Melodious dew sings, in the smiling air...

Images: 1. Pinterest 2. Deviantart
Posted by Chethana Ramesh at 05:18 No comments: 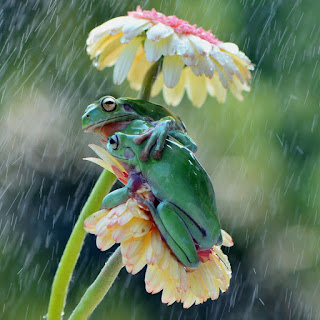 When hurdles arrive as a battalion
& raging tempests form,
we all crave a companion
to help us weather the storm.

To jump in joy or suffer in gloom,
to brave boredoms of numbing norm;
To share a hug & balance on a bloom,
we need sunshine to smile after the rainstorm.

Posted by Chethana Ramesh at 07:29 No comments:

The Lady of Shalott - A Tribute Poem.

This poem is my fifth tribute to an English poet. This is in memory of the haunting lyrical ballad by Alfred, Lord Tennyson (1809 -1892), 'The Lady of Shalott'.

'The Lady of Shalott' tells the story of a young noble woman imprisoned in a tower on an island near Camelot. She can only watch the outside world through a mirror and must weave what she sees. She has heard that if she looks at Camelot directly, she will be cursed.

This is one of Tennyson’s most famous and beloved poems. It was originally written in 1832 and was published in 1842. 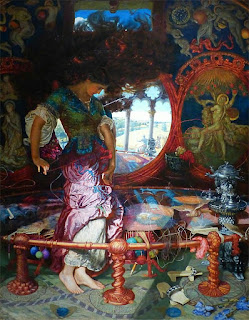 A medieval maiden near Camelot,
is cursed beyond repair;
In hues of reflected images sought,
weaves perpetual webs of despair;
The lonesome lady of Shalott
seeks redemption fair;
Loss in battle of wills well-fought,
a cracked mirror doth impare 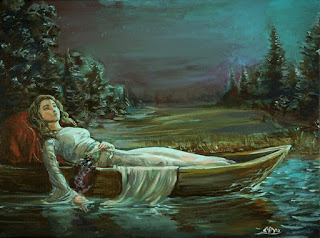 From her tower, she departs distraught,
pale attire she doth wear,
Embarks she, on journey untaught
a quest beyond compare
A buoyant boat, she floats for a naught,
heavy heart barren & bare;
In whirls of water she is caught
clutched in a quagmire's glare. 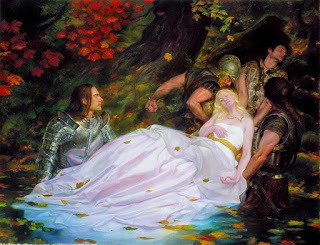 Freezes she, in grasp of a deathly draught,
long before she spies a lair.
Found she is, her skin taut
& eyes in sightless stare.
They bow in grief, bereft of thought
& bow their heads in prayer. 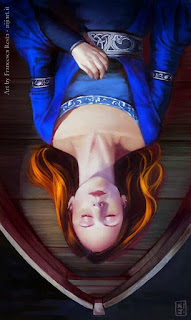 A quandary she stays, in poetry wrought,
eternal in her story unfair
A paradigm of Providence's pitiless plot,
a memory, in millions' minds aware

And thus remains the Lady of Shalott
a testimony, to Tennyson's matchless flair.

Posted by Chethana Ramesh at 00:38 No comments: 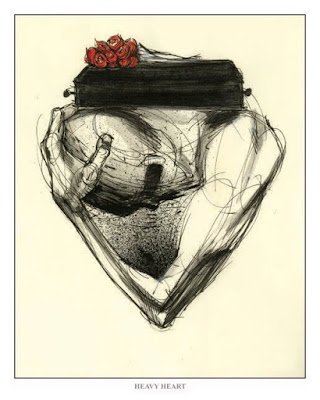 The remains of love
rot in a coffin of betrayal,
murdered by lies,
buried in memories of distress.

Morbid petals mock
as muscles of melancholy
inflict a crush of death,
to remnant hope in duress.

A heavy heart
breathes its last,
smothered by the weight
of its own emptiness.

Posted by Chethana Ramesh at 23:07 No comments: