Book Review of ‘A Beautiful Chill’ by Stephen Swartz. 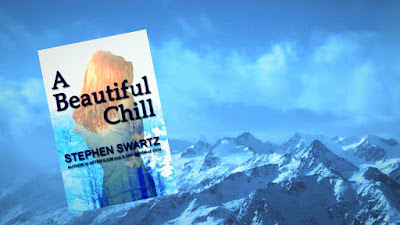 My 22nd read of 2021 is my second read of author Stephen Swartz. This book is quite unlike any other I’ve read in many aspects. For one, it is not a biography like the last one, A Girl called Wolf. Secondly, it is essentially a love story, similar to another novel of the same author namely Exchange, but with many differences.
It is a juxtaposition of love, desire, trauma and self-discovery with art, myth, human psychology and literature. Quite a rare combo, indeed. The ending blows one away in a quiet crescendo, that beats expectations readers generally have, for love stories.

English Literature students will have much to learn from Stephen Swartz’s books, that draw from his long expertise as an English professor.

Two protagonists immersed in their own despair discover one another in more ways than one. Their inner turmoil equals the pressure that the world around them – relatives, colleagues and friends – who wield subtle and not-so-subtle influences over them. Both of them would make highly interesting psychological studies.

All the other characters gain importance as and when they come along and add their crucial bits, into the equation brewing between the Eric and Iris. Even the minor characters assume importance in how they change or affect the processes going on within the minds of the two main characters. Each character is powerful, in the way he or she affects the thinking on one or both the key players in the story.

Eric’s self-doubts make our hearts go out to him as much as they do for Iris’s childhood trauma. How her trauma refuses to let go of her, until it becomes irreversible forms the crux of the story.

Eric’s inner struggles with respect to how people around him would perceive him are compelling. His passionate speech about the loneliness of a single middle-aged man in a hormone-challenging environment are eye-openers to the society, that is often blind to the human aspect of the male populace.

The fragile equation between a middle-aged son and his parents put to test when his carefree girlfriend meets them, is dealt with in its ridiculously humourous, yet completely serious finesse.

The Wicca rituals, witch references add a mythical touch, even as the Icelandic legends weave themselves into the story. This makes it a rare enmeshing of ancient myth into modern reality, minus any supernatural or paranormal inclusions.

It takes some psychological knowhow to comprehend the erratic (especially sexual and sometimes nudist) behaviour of a character like Iris. The various interpretations by other characters may either add new dimensions or further confuse a clueless reader, thus augmenting the depth in her character.

What remains a strong motif throughout the story is the theme of reversal or opposites – the typical dating ritual in reverse, the female, rather than male promiscuity, perceived strength or weakness of the male species, the blatant lack of secrecy of the woman in a gossip-riddled judgmental environment, and many more.

It is also interesting to read the tendency for often malicious gossip, that seems to perforate even the supposed modern, or culturally advanced university environment of America. It underlines the fact that the innate character of human beings essentially remains quite the same, irrespective of where they exist in the world.

The matter-of-fact, non-judgmental narration works well for topics that are as sensitive as this one. There is absolutely no hint of narrator’s ‘voice’ to be gleaned from even the most ludicrous behavioural/thinking processes of the characters.

I completely loved the references to Shakespeare, especially his plays. The analyses of some of the Bard’s plays woven neatly into the story’s narrative are brilliant and add a realistic turn to the University classroom setting and sequences.

I rate the book 4.6 out of 5. Extra points for the brilliant insightful analyses of English and intriguing Icelandic Literature woven into the story and narrative.

Do follow my blog if my reviews are interesting. Happy reading, readers!

Posted by Chethana Ramesh at 18:31