Book Review of 'Year of the Tiger' by Stephen Swartz 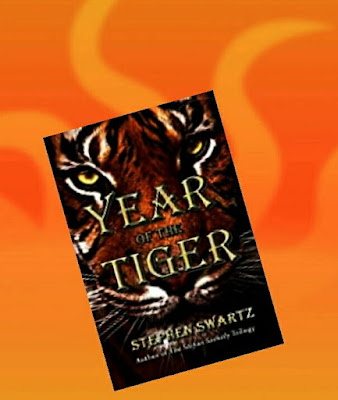 This is by far the best book of this author. I had saved it for last because I knew that the book is set in India and the plot seemed intriguing in the blurb. I absolutely enjoyed the vivid descriptions of Indian jungle, old temples and crowded marketplaces as perceived by the characters.

I believe that humans are absolutely the worst things to happen to this planet. Reading this story seemed like a reiteration of the same theory.

It starts off as a simple story of a disturbed man in an asylum, with an understanding nurse who assists him in ways far beyond her duties. His narrow escape from a murder attempt and the consequent chase across half the world is just one facet of the story.

The other dimension is the one which adds a surreal thrill to the plot. The simultaneous flashes of a tiger living his life in Bengal projected into Karl’s mind make him go more insane. The result is Karl and Althea ending up chasing the tiger across the landscape of India. Add to this the crazed murderer baying for his blood, plus a narcissistic hunter baying for the tiger’s blood and we have the perfect recipe for an unusual thriller.

The theme of magical realism has been used to heighten the effect of the conservation of wildlife to the plot and add a surreal twist to the tale.

The Tiger is the most endearing character of them all. And Swartz brings out the real danger of extinction of the striped mammal in a classic characterization that delves into the mind of the tiger himself. The portrayal of love between the tiger and his beloved mate is convincing, endearing , adorable and heart-wrenching.

What I found most interesting was the depiction of the man-eater as harmless, if left alone. It is highly convincing as well, especially since the prevalent theory of man-eaters being irreversibly harmful to humans has sanctioned the slaughter of beasts perceived as dangerous.

If the objective of the author was to showcase the character of man for what he is – in all his cruelty, sadism, foolishness and arrogance of false entitlement over the earth – he has succeeded with aplomb. And the human characters fighting to kill one another even as the tigers wait to attack them is a classic showcase of man in all his shameful way of existence.

Overall, an entertaining read. I rate it 4.8 out of 5. Extra points are for the juxtaposition of two seemingly different themes with smooth finesse.

Did you enjoy my review? Do follow my blog to find more reviews, and for poetry, quotes and nature photography too.