Book Review of 'The Kite Runner' by Khaled Hosseini 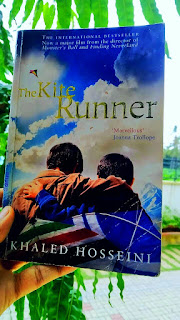 I have been saving this read since a long time. My last book by Hosseini was the famed, deep, disturbing read: A Thousand Splendid Suns. The story and even some powerful scenes have stayed etched in my mind despite the passage of more than half a decade of reading it.  I knew that 'The Kite Runner' would be a similar read: powerful and impactful.

There are few characters, well defined and memorable. Amir and Hassan are the friends, who are handed different statuses in society by a cruel twist of fate. Baba’s character evolves continually, even after his death. Sohrab, the child throws light on multiple cruelties meted out to children by the Taliban.

The other characters such as Hassan's father Ali are crucial to the build up of the tale. Amir's wife Soraya and uncle Rahim Khan, assume more importance as the story builds up with the turn of the pages, especially in the second half. The cruel character of Assef returns to offer an element of more shock and surprise, towards the climax.

Set in Afghanistan during the initial days before the country was plundered and ravaged by the Taliban, with a shift to America, the story brings out the contrast in the lives in the two countries, and its effect on the people. The latter part is rich in atmosphere, where the damage caused by the Taliban rule is showcased in a highly impactful manner.

However, the story is about the deliberate disruption of friendship of a lifetime by a mind that is insecure, envious and cowardly. It is about unquestioned loyalty amidst betrayal and hurt. And then, it is about seeking redemption, while paying a price for acquiring it.

Thereby, the story is a bildungsroman, narrated by the protagonist Amir, charts his growth through his childhood to manhood amid a lot of honest soul-searching and courage. Strong symbolism plays a constant role in adding layers to the characterization and story-telling - the main one being the kites.

Friendship, jealousy and redemption are the main themes. Other important themes such as religion, parental relationships, racism, casteism, romance, love, trauma and childhood rape add potent nuances to the storyline.

A powerful novel, that juxtaposes history with human psychology, a must read. I rate it 4.7 out of 5. Pick it up only if you are able to read it in as less sittings as possible, because it won’t let you go until the last page is turned.

If you found my review useful, do follow my blog for more. Happy reading, readers.

Posted by Chethana Ramesh at 06:23