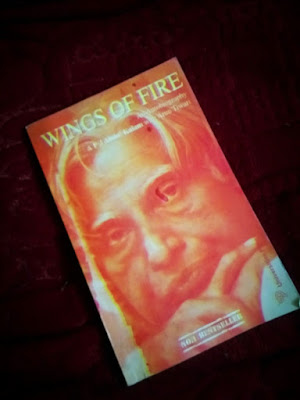 I had saved this book for the New Year. From what I’d read and heard of it, I wanted to commence the year with the inspiration it offered. And I was inspired, beyond measure.

Many reviews have already been penned about the book and its contents. I choose to focus only on the aspects that I found unique or endearing.

The man and his Gratitude.

One will surely lose count of the number of people Dr Kalam has remembered to thank, mention and acknowledge in his autobiography. It is not confined only to his teachers, but extends to all the important people he interacted with, worked with or was influenced by. We live in a world where most people heap the efforts of others onto their own bandwagon of achievements with easy nonchalance and lack of guilt. And here is a man like Kalam who influenced millions of people across the globe and yet, lists out every key individual he dealt with by name and designation. This is the kind of gratitude that only one in a million may possess.

The man and his Simplicity

When Dr Kalam recounts how his room was the same humble dwelling, albeit in a different location, even after he became the Director at DRDO, one wonders what fabric he was made of. His humble breakfast of idlis, chutney and buttermilk makes one wonder at his lack of desire for the finer things of life. It is beyond inspiring to read the story of a man who began with such humble beginnings in Rameshwaram and went on to scale the greatest heights of scientific technology.

The man and his Genius

Most people claim to be influenced by a host of self-help books that teach people how to become rich, content, famous, happy or enlightened in life. I have never been a fan of such self-professed gurus preaching to the world, about how to live and grow. But reading Dr Kalam’s story teaches us all this and then some.

It is a mark of Dr Kalam's genius that allows the world to read about the functioning of the defence organization – one of the most secretive aspects of the nation – without compromising on any facet of its security. Further, highly complex algorithms of the working of the scientific community, in a completely simplified language that can be assimilated by the common man. Only someone like Dr Kalam could simplify even rocket science to a common reader’s level of comprehension.

Each quote by Dr Kalam is a gem of gold. He touches upon leadership, teamwork, ambition, hard-work, sharing, caring, commitment, responsibility, focus…the list is perpetual, the learning immense.

‘Wings of Fire’ teaches us how ambition can be completely devoid of material greed; how being wealthy has nothing to do with money; how contentment is independent of possessions; how fame is earned through relentless hard work and unselfish motives and how enlightenment is gained through craving for lifelong learning from all sources.

The man and his Pride in India

Few people can instil a sense of patriotism like Dr Kalam does. He shows us that Indians can achieve a lot more than they are ever given credit for. His comments on the brain drain of India is bang-on and hard-hitting. No Indian can help being filled with a sense of pride for the motherland, as her journey of achievement, to becoming a missile-capable nation with Agni and Prithvi unleashes in the pages.

The man and his Resilience

It is heart-rending to read about the failures the teams encountered. But Dr Kalam’s resilience in the face of misfortune, worse the mockery of the media and negative forces within India and across the world is a story of empowerment in adversity.

The man and his Family

It is thrilling to read about how Dr Kalam is distressed to miss his niece’s wedding and ends up on a helicopter flight to catch the train that takes him to the venue. His angst at losing his parents and brother-in-law is palpable.

His complete dedication to his work allows us a semblance of comprehension, as to why he remained a bachelor till the end of his days.

Dr Kalam acknowledges Arun Tiwari’s role in bringing the book out to readers. The praise is completely justified. Tiwari has undoubtedly put in more than his share of work to compile the life story of the greatest scientists of India and juxtaposed it with the growth of India as a missile superpower.

Worth a complete five-star rating, to say that this book is a must-read is an understatement.

It sure gave wings to my inspiration, and the year has begun on an excellent note for me.

If you found my review useful, follow my blog for more. There are many more reviews to come.

Posted by Chethana Ramesh at 20:54