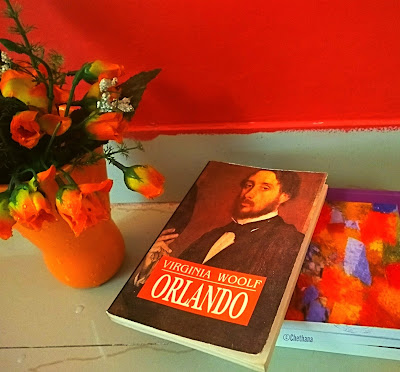 “A woman knows very well that,
though a wit sends her his poems,
praises her judgment, solicits her criticism,
and drinks her tea, this by no means
signifies that he respects her opinions,
admires her understanding, or will refuse,
though the rapier is denied him,
to run through the body with his pen.”

Orlando is different from Virginia Woolf's other books like 'To the Lighthouse' and the non-fictional lecture-book, A Room of One's own. I have classified the review under various sub headings to demarcate multiple themes with better precision.

Some books are easy to read, with an easy flow of language from one page to another. This book took me a longer time to finish, than I anticipated. Woolf's style of writing may be described as smooth, however it is not easy to read as fast as most other works. One needs to get used to the long sentences, flow of ideas from one paragraph, page or chapters to another.

Although there is a feel of strong 'Stream of Consciousness' in Woolf's writing style, one may argue that it is not as disjointed as Joyce's 'Portrait of a young Man' or even Miller's 'Black Spring'. However, unlike Miller's unending lists of seemingly unimportant content, the protagonist Orlando's ever-changing thought flows, opinions and ideas connect to nostalgia that spans across 400 years, though he stays in his thirties! This emulation of the human mind is shown with good clarity through Orlando, and is made more interesting when the comparison between the thinking of both genders is added to the equation.

There are long passages that do get tedious to follow. The story-line moves fairly well, though some parts range from too fantastic to almost gross. Woolf’s personal angst is barely camouflaged in Orlando’s observations or lamentations. At times, it weighs heavily on the narrative, with reminiscences that are excessively nostalgic.

Knowing Woolf to be a writer of feminist theories makes it easier to grasp the changing topography of the story line. It is a stroke of brilliance that Woolf's protagonist changes his gender and becomes a female. Have not the feminists of today cried their voices hoarse just to highlight the societal perks denied to women, but enjoyed by men? Haven't women over the ages wished for men to 'understand' them, while the men have tried to do so in vain? Orlando lives the life of both genders and comprehends the subtle intricacies of a woman's feelings, even as (s)he understands the differences with clarity. What makes it more interesting is that Orlando's gender change examines the physical, mental and most importantly, the differences in societal perceptions of the two genders.

It is interesting to note that the three figures who are instrumental in turning Orlando into a woman are named as the ladies of Purity, Chastity, and Modesty respectively. The depiction of each of them is hard-hitting in its satire. The focus on virginity as an important criteria for a woman, as opposed to the promiscuity of Orlando as a man cannot be missed.

The unfair inferior treatment meted to women with regards to their intellectual capacity is ironically showcased throughout the chapters where she is a woman. This reminds one of the period during which Woolf struggled to make a mark as a writer in a male dominated environment. Readers are also prone to recall the angst of Sylvia Plath's poems that harp on similar themes.

Another instance of genius that cannot be ignored, is the traverse of the story through centuries, in the literary perspective. It is an intriguing joy for literature lovers such as myself to read about Pope, Addison and Swift as characters who interact with the protagonist of the novel. The paragraphs describing Orlando's carriage journey with Alexander Pope, where her perceptions waver from positive in the dark, to negative in the light of streetlights, are laced with oxymoronic humour loaded with serious symbolism.

Orlando’s analysis of Browne’s conceits and Donne’s talents are interesting to behold, especially when one gets a strong inkling of Woolf’s own critique, through Orlando's voice. I actually found myself nodding in agreement, when Orlando (or Woolf, as we are well aware) cites Shakespeare, Marlowe, Ben Jonson, Browne, Donne as favorite heroes.

“Now all young writers were in the pay of booksellers and poured out any trash that would sell. Shakespeare was the chief offender in this way and Shakespeare was already paying the penalty.”

How different is the situation now, in the twenty-first century? A host of authors today continue to churn out what the masses want, irrespective of how their work compromises class, quality or value in content.


“…neither of which the Greeks would have tolerated for a moment. Much though it hurt him to say it – for he loved literature as he loved his life – he could see no good in the present and had no hope for the future.”

Nevertheless, literature is an escape from harsh realities of life for many a reader or writer alike. This idea is consistently harped on, throughout the novel. Orlando's love for literary pursuits, be it books or poetry (The Oak Tree - a recurring symbol) leads people to think of him/ her as strange. An observant reader would surely notice the sharpened irony, when Orlando seeks literature more vehemently, after heartbreak from his Russian lover Sasha and betrayal from poetaster Nick Greene.

Thereby, a literature lover's takeaway: Books and poetry are definitely preferable to socializing with unworthy people.

“No passion is stronger in the breast of a man than the desire to make others believe as he believes. Nothing so cuts at the root of his happiness and fills him with rage as the sense that another rates low what he prizes high. Whigs and Tories, Liberal party and Labour party — for what do they battle except their own prestige?...Each seeks peace of mind and subserviency rather than the triumph of truth and the exaltation of virtue”

Woolf makes some deep observations that delve into the psyche of human beings. The way she connects it to the politics of today is an indication of how human nature does not change, despite the passage of time. Her quotes remain timeless, till date, across boundaries and centuries.

“At one and the same time, therefore, society is everything and society is nothing. Society is the most powerful concoction in the world and society has no existence whatsoever”

The episodes with gypsies beings out the clashes of the cultures working within the framework of society. It is an sure opener to read about how the gypsies value the availability of  possessing Earth as a whole rather than the physically large palatial structures that other men brag about with immense pride.


“Vain trifles as they seem, clothes have, they say, more important offices than to merely keep us warm. They change our view of the world and the world's view of us."

The premise of how important clothing was to English society at the time is highlighted during the phase when Orlando's gender change causes her to notice several intricacies related to the same. As a woman, Orlando struggles to grasp the limitations of female attire as well as the positive ramifications. The episode where a sailor is shockingly, albeit inadvertently seduced by a mere glimpse of lady Orlando's calf is hilarious, especially when Orlando realizes the sheer sexual power emanated by a beautiful woman over men.

The juxtaposition of fashion with sexuality is a recurring theme for both genders throughout the novel.

Last but not the least, the key fantasy element where Orlando traverses through four centuries,(from the sixteenth to the twentieth centuries) without ageing, allows Woolf to showcase not only  the strong societal nuances of each period, but also literary connotations and famous figures of the respective times.

The ticklish episodes, where lady Orlando is smothered by boredom in the company of her ardent and atrocious wooer Archduke Harry, are hilarious, while her feelings ring with terrible truth of a loveless unrequited relationship. The reader aches, and identifies with Lady Orlando's frustration, as she pines for an escape into her writing, even as the Archduke foolishly strives to hold her attention. The scenes where she fools him repeatedly with a dead fly made me double up with laughter, even as I was uncannily reminded of the brilliant poem by Donne, where he uses the conceit of the Flea to seduce his lover.

The carriage ride with Alexander Pope, as mentioned before, is funny in its deeply observatory, powerfully analytical, yet finicky state of her mind. The sailor incident, although confined to a short line or two, leaves the reader in splits.

Myriad themes and heavy symbolism make the novel definitely worth a read, as long as readers can get used to the writing technique. A journey into the important nuances of feminism, juxtaposed with a profusion of learning scope about the eminent literary masters of the English creativity graph, makes this novel a must-read for literature lovers and students alike.

Did you find my review useful? Do let me know in the comments.

Posted by Chethana Ramesh at 05:25