Book Review: A Room of One’s Own by Virginia Woolf. 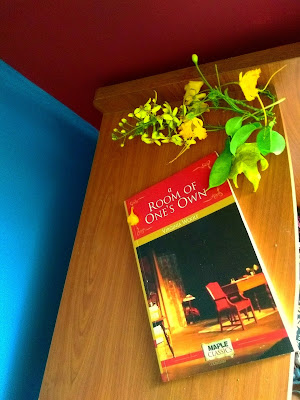 "A woman must have money
and a room of her own
if she has to write fiction."

I normally do not read non-fiction, unless I feel compelled to. The last book of Woolf that I read was Orlando. I am eager to read To the Lighthouse as well. A Room of One's Own, was one of the compelling ones, given that it is a long essay, penned like a fictional piece of nonfiction. However, it was the thematic motif that gains precedence over everything else: women’s writing.
The book is a set of extended lectures that Virginia Woolf delivered to the literary societies of Newnham and Girton colleges, Cambridge in October 1928. As I turned the pages, I could not help wondering how much was added to the original script, to turn it into the full-fledged book. I tried to picture Woolf on the dais, her notes before her, reading some these lines to the eager group of girls before her. I could not imagine her reading some paragraphs though, because they seem far too elaborate to be used fruitfully in a lecture.
The famous catch-line appears on page one itself, though not highlighted or quoted separately, it is the crux of the whole book. At the outset, it may seem like an exaggerated claim. But Woolf does go on to emphasize, analyze and explain her theory with great detailing.
While it may seem like a far-fetched expectation or assumption, it does make sense when we remember the time during which Woolf wrote. The position of women was better than it was hundred years earlier, when Mary Wollstonecraft wrote her books such as 'Vindication of the Rights of Woman', but was certainly not as relatively better as current times.
What struck me at once, is the fact that a hundred years down the line some things have not changed at all. Didn’t Rowling admit that she was forced to write in a cafe, because she found it more conducive to writing?
Another striking factor is Woolf’s observation that women used male pseudonyms to write. How far off is it today? One only has to look at Rowling again, and also the highly successful erotic series penned by E.L.James, who was thought to be a man for the longest possible time. Woolf did hit the nail on the head with her analysis of the situation.
However, one must admit that it is usually easy to identify the writing of a man which is different from that of a woman. When she tackles the idea of values, we may agree with Woolf when she points out that for a man, topics such as football, sports etc. may be more important than shopping, which he may trivialize. So a man may perceive a book on war as more important than an ‘insignificant’ one that deals with a woman’s feelings. This could be the reason that some books that women love may be boring to men, and vice versa.
While pondering on her core statement, women do need money to sustain themselves. Few writers are able to sustain a livelihood solely from writing. As for a room of one’s own, privacy that allows minimum interruptions to thought flows and emergence of ideas is a prerequisite for creativity. 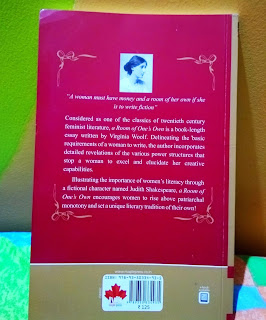 However, even the layman would notice that these criteria are hardly exclusive to women. Men need the same luxuries to be successful writers. Having said that, we again tend to agree with Woolf, when she points out that poets like Keats, for instance, did face less hardship (in terms of being able to find a place to write in peace) than the women of their time, despite their poverty.
‘The creative power of women differs greatly from that of men. Ought not education bring out and fortify the differences rather than the similarities?’ (79)
The gender inequality and its role in writing of women is exemplified convincingly by Woolf. In addition to earlier mentioned factors, women tend to be hesitant or reluctant to write what they actually want to write, thanks to censure that is patriarchal, and then some. The society at large does judge women a lot more.
The fictional aspects used in the book are enticing in their essence. The creation of a sister for Shakespeare to drive home her points is a masterstroke. Judith, the imaginary sister’s story is heartrending, more importantly it is completely convincing. The scenarios gain more credibility when compared and contrasted with the life of Shakespeare, as described rather accurately by Woolf. The scenario is a timeless one, because one can imagine a similar series of events occurring to any woman in today’s time too.
To conclude, Woolf has touched upon core ideas that are crucial to writing, irrespective of one’s gender, namely financial security and privacy that ensures minimal interruptions. Additional aspects such as gender inequality and women’s literature put forth some important perspectives. Overall, the book offers ample scope for more thought and discussion.
Did you find my review useful? Do let me know in the comments.
Happy Reading. Stay safe, readers.

Posted by Chethana Ramesh at 06:10