Book Review of 'The Name of the Rose', by Umberto Eco 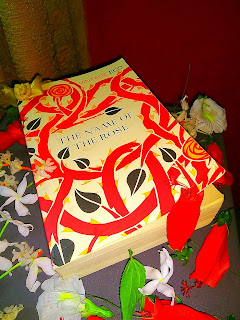 The first thing that a reader notices in the novel is its sheer size. 576 pages with a tiny font is any avid book lover’s dream. I believed that the gigantic book would be a challenge to finish. I was wrong. The novel is gripping and reading it poses no difficulty in terms of its size because of its absorbing storyline. A historical setting, with a thrilling quest for an ancient book, with murder mysteries thrown in for good measure, it is any thrill-lover’s dream.
The main reason I picked up this book was because it is about a pursuit for an ancient lost book of Aristotle. I have read the Da Vinci Code and was looking forward to a la Dan Brown kind of adventure. Somehow, the idea of Langdon being replaced by a monk seemed more intriguing to me. I was not disappointed on this count. Add a series of daily murders to this combination and the book becomes unputdownable.

Readers who love Sherlock Holmes will be pleasantly surprised to find another entertaining pair, embroiled amidst dangerous situations, complete with a young narrator taking the role of Doyle’s Dr.Watson to boot. One notices many similarities although the setting, era and roles are different.
William and Adso make an entertaining pair, perfectly conceived to suit their respective roles. William, the highly educated monk is the brilliant detective albeit with his own share of self assured competitiveness that borders on arrogance. He is portrayed realistically with the right amount of wit and wisdom, tinged with doubts and discrepancies that plague his mind.
Adso, William’s disciple, like Dr.Watson is an endearing narrator, well suited to function as William’s sounding board, and also give William’s conclusions a well-needed nudge in the right direction. Adso charms us with his occasional genius and his innocent musings about his master. Adso is the vehicle that teaches us the lessons intended by the author.
There are seven other characters who get killed and of course, the killer. The only grouse about the characters are the Italian names that are hard to remember. It is a challenge for readers to connect and reconnect their roles to the progressing action. I will elaborate more in the review section.

The book is interestingly structured, in accordance with the story line. Seven days, seven murders, hence seven divisions. This is in addition to the prologue and an epilogue of sorts, titled 'Last page'.
What’s more, each chapter has a kind of preview about what is to come. Rather than ruining the suspense as one might expect, they actually add on to the mystery of how the specific events unfold.
A useful addition is a pictorial depiction of the map of the labyrinth, of the library that forms the crux of the whole mystery.
Also, the vintage Eco edition contains a postscript which is quite enjoyable because the author recounts his reasons for choosing the title of the book, elaborates on the writing process and a lot more.

The book is no doubt a mega-colossal, multi-dimensional affair of epic proportions. The whole ancient setting, with brisk pacing and action-packed sequences are a joy to read.
The real challenge though, is in the comprehension or rather, the demands it makes on an average reader’s memory. No, don’t get me wrong. The vocabulary is top notch and comprehensible for any person with good command over the language. The narrative flows in tandem with the fast-paced storyline as well.
However, there are two reasons why the book takes more time to get through. One: As mentioned earlier, the sheer number of characters. Eco seems to have taken a few pages from Agatha Christie’s style of story-telling. The more the number of characters, the more difficult it is for readers to try and figure out the murderers. But, what is harder is that the names of characters are difficult to remember, perhaps because they are Italian.
Two: There are many lines, passages and even poems, that are in not in English. The lack of a translation makes the reading experience full of tedious breaks. This does not allow readers to figure out or even comprehend the complete answers to the puzzles getting unravelled by the protagonists.
Despite all this, it is quite easy for us to figure out who is behind the killings (at least it was, for me). Again, similar to Christie’s stories, we need to wait for the detective to unravel exactly how and why the murders were committed. The sheer ingenuity of the murderer’s methodology deserves utmost praise for its brilliance in conception and execution.
Also, one should be warned to expect some blood and gore, not to mention some active sensual copulation, complete with ample mentions of homosexual incidents tossed in as well. This is despite the setting being a highly religious one, with monks as characters, no less.
The main grouse that I had with the narration is the length of some descriptions. The imagery that they bring forth are commendable, except that they go on for pages on end.
There are passages where the young Adso begins to describe a setting and two or more pages down the line, one notices that he still keeps at it. A dream sequence is so long that one is incredulous and tense that he is able to delve so deep in his trance and to such lengths while sitting amidst a serious prayer sequence.
Anyone who has read Henry Miller would know what I mean. There are only two ways about the reaction of a typical reader who has to trudge through such pages. Readers either get drawn in completely, enthralled with the endless rush of the narration, or they are just left gasping for respite, overwhelmed and smothered by its sheer perpetuity. I belong to the latter, the breathless breed, trying to cope with the information overload that taxes the brain with a lot of unnecessary information. Perhaps that is the intention of the author. Providing too much information confuses the reader in focussing on the key aspects of the story and perhaps makes the mystery seem more difficult to solve with the protagonist.
I consider this book to be a tragedy, the brilliance of it being that the fictional occurrences are woven into the narrative to ensure that they match real facts. Thus, Eco's book being a tragedy, follows Aristotle's elements mentioned in his 'Poetics', that enumerates the six elements for tragedy including the plot, character, thought, diction, song and spectacle. The book qualifies on all counts, including the songs in the form of poems and a huge apocalyptic  spectacle, in the climax.
However, when it comes to the diction (or expression of meaning in words, as Aristotle puts it), the narrator is on a quest for the lost book of one of the greatest philosophers of all time and yet, succumbs to the need to over-explain everything with useless details. But then, I do concede that a novel is bound to be different from poetic drama, owing to its very nature and the characters do not need to conform to guidelines set for dramatic purposes.
The fictional aspects are juxtaposed well with factual information ensuring that the story is presented convincingly. The series of events in the apocalyptic climax ensures that the fact of the book being lost forever, is taken care of, by the antagonist.
Lastly, the methodology of  the execution of the murders is a masterstroke of brilliance, reminding us again of Holmes and Poirot's adventures.

Overall, this is a classic that must be read by anyone who claims to be an avid reader or lover of literature. Students of English literature may find many aspects to learn and enjoy, or even be thrilled with some discussions and depictions in the novel.
I rate the book 4.25 out of 5.
Hope you find my review useful. Do let me know in the comments.
Stay safe, readers.

Posted by Chethana Ramesh at 07:50