William Shakespeare (1564-1616) was one of the greatest writers of English language, actor & the most famous playwright in the world. Known colloquially as 'The Bard' or 'The Bard of Avon,' he wrote 37 plays, 154 sonnets, 375 poems & 5 long narrative poems.

This poem is part of my tribute to the Bard of English Literature, William Shakespeare. I have drawn inspiration from one of his epic poems, 'Shall I compare thee to a Summer's day?', which happens to be an all-time favourite of mine.

I also used a bonus prompt from 'The Midsummer Night's Dream' :
Winged Cupid.

Here's to the Bard, beyond compare;
the one and only Shakespeare. 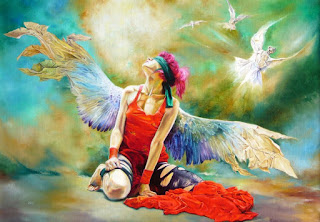 Celestial signs
from an eye of heaven
on a summer's day;

Dazzling designs,
blinded in Eden,
in eyes of mind's display.

Posted by Chethana Ramesh at 08:23