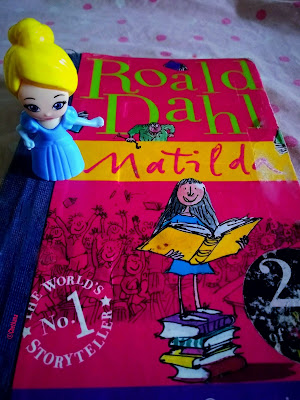 'If only they would read a Dickens or Kipling, they would soon discover there was more to life than cheating people and watching television.'

Some parents become so blinded by adoration they manage to convince themselves their child has qualities of a genius.

She seemed to know that neither crying nor sulking ever got anyone anywhere.

This is my first book of Roald Dahl. I like to read Children’s literature from time to time, especially between my reading trysts with hardcore thrillers.

The story of Matilda appears like any other simple one, but unveils one twist after another right from the first chapter to the last. It is an absolute delight to read for avid readers who love to devour English Literature.

The brilliance of a mere five year old child, who can read books that most adults struggle with and work out complicated math with the same ease as a calculator, hooks the reader. Contrary to what one would expect her parents turn out to be detestable and appalling characters, who take pleasure in insulting her capabilities rather than being amazed or proud of her.

The child in Matilda offers the reader some solace by turning her brilliant mind in paying them back and thereby keeps the reader glued to the pages.

The perpetual appetite of the child to glean more knowledge and her unerring dedication to reading is heartwarming. Ms. Honey’s aspirations to help Matilda upgrade to a higher class is met with refusal because well, the headmistress of the school is the next antagonist of the story.

Mrs. Trunchbull is the quintessential villain that terrifies the strongest souls in the vicinity. How Matilda uses her intelligence and grit to overcome her challenges, amidst of host of twists and turns, forms the crux of the story.

The dialogues of the antagonists are annoying enough to disgust the reader to good measure.

The condescending attitude of Matilda’s mother, who believes that a girl’s sole calling in life should be to make herself attractive for a rich man, resonates with life lessons that aim to teach more about ‘Brains vs Beauty’, than even most adults would care to admit.

The character of Trunchbull, although supposed to be terrifying to the young reader is grossly exaggerated. The parts about where she manhandles the children makes the reader suspend belief as it is aimed to be. The notion that all the children are relatively unharmed despite being thrown bodily for miles or having their arms almost pulled off, fails to ring true.

It would have been more interesting if the story had not taken a turn towards the supernatural element in the second half. Although there is an attempt to color Matilda’s levitation ability to a scientific phenomenon, it does not resonate smoothly with a reader who has already been forced to accept the hyper-intelligence of a five year old child.

Overall, a good read for children and yes, adults too. Because, life lessons are not limited to children alone.

And that is the Trunchbull’s great secret.
What is? Lavender asked.
‘Never do anything by halves to get away with it. Be outrageous. Go the whole hog. Make sure everything you do is so completely crazy, it’s unbelievable.’

It’s a funny thing about mothers and fathers. Even when their own child is the most disgusting little blister you could ever imagine, they still think that he or she is wonderful.

Some parents go further. They become so blinded by adoration they manage to convince themselves their child has qualities of a genius. 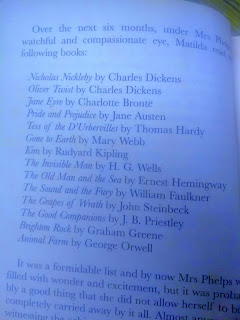 The books transported her into new worlds and introduced her to amazing people who lived exciting lives.

If only they would read a Dickens or Kipling, they would soon discover there was more to life than cheating people and watching television.

She sat there still & white & thoughtful. She seemed to know that neither crying nor sulking ever got anyone anywhere.

There was an aura of menace about her even at a distance..Thank goodness we don’t meet may people like her in this world, although they do exist and all of us are likely to come across at least one of them in a lifetime.

‘The human brain is an amazing thing.’Miss Honey said.
'I think it’s a lot better than a lump of metal.' Matilda said. 'That’s all a calculator is'

A witty limerick is very hard to write. They look easy but they most certainly are not.

‘I think C S Lewis is a very good writer .But he has one failing. There are no funny bits in his books.’

‘But does it not intrigue you that a five year old girl is reading long adult novels by Dickens and Hemingway?’ Ms.Honey said.

I’m not in favour of blue-stocking girls. The mother said. ‘A girl should think about making herself look attractive as she can get a good husband later on. Looks are more important than books…You chose books and I chose looks. And who’s finished better off? Me, of course. I’m sitting pretty in a nice house with a successful businessman and you’re left slaving away teaching a lot of nasty children the ABC.

The Trunchbull said, ‘My idea of a perfect school, Miss Honey, is one that has no children at all. One of these days, I shall start up a school like that. I think it will be very successful. ‘

The whole face was transfigured, the eyes round and bright, and she was sitting speechless, quite beautiful in a blaze of silence.

Posted by Chethana Ramesh at 01:33