Book Review 14 : ‘The Chronicles of Narnia : The Magician’s Nephew’, by C.S.Lewis. 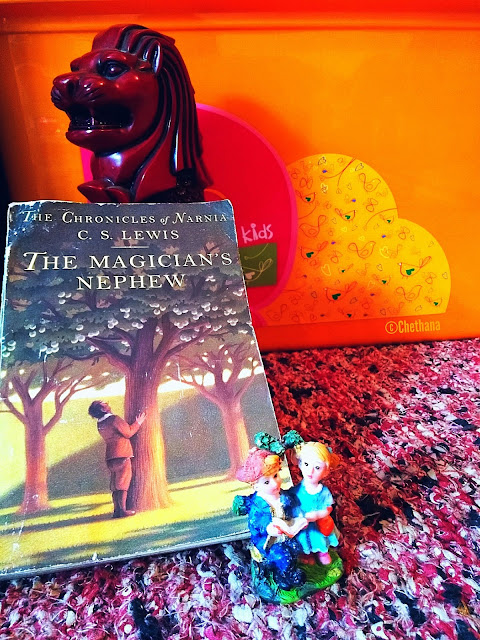 Make your choice, adventurous stranger;
Strike the bell and bide the danger,
Or wonder till it drives you mad,
What would have followed if you had.

Digory, a boy.
Polly Plummer, a little girl.
Jadis, an evil Witch.
Aslan, a Lion, the creator of the mystical world called Narnia.
Andrew, Digory’s ruthless uncle.
Aunt Letty, Digory’s aunt.
Frank, a cabbie.
Strawberry, a horse that is transformed into Fledge, a Pegasus by Aslan.

Two children who live in London, are thrown together in an adventure into a magical world that involves evil witches, talking animals and mystical beings. It all begins when they poke around their attics, armed with a candle, and stumble into the forbidden loft of Digory’s uncle. The wily man tricks them into handling magical rings that transport them into a strange and eerie unknown land called Charn. Digory being the curious boy he is, rings a bell that brings to life a sorceress queen called Jadis. She uses threats and coercion to accompany the children into London and wreaks havoc around the city with the uncle’s unwilling aid.

In their attempts to return the witch to her own world, they stumble upon another new world which is in the process of being brought into existence by a singing lion, Aslan. This new land is called Narnia. Aslan chooses pairs of beasts of different species and professes them with the power of communication. The empowered animals are forewarned to the dangers of Jadis, who has entered Narnia. Digory is imparted with the onus of procuring an apple that would save Narnia from obliteration by Jadis. 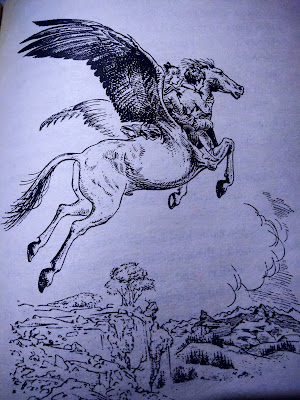 Digory and Polly travel on a Pegasus called Fledge, to another faraway world to fetch the magical apple to save the kingdom of Narnia from the evil sorceress. The story culminates with Digory being successful in his endeavor and subsequently saving his mother from her terminal illness.

This is the first book of the famous ‘The Chronicles of Narnia’ series, which has seven books in all. It would be prudent to read this book first to understand the nuances of how Narnia came into existence, where the mystical happenings begin.

I have not watched the Narnia movies, simply because I prefer to read the book before I watch the story on the screen. Perhaps, that is the reason that I am able to allow my imagination to take over when I envision the characters described in the book.

Lewis creates vivid imagery that brings the whole atmosphere of each scene to life. Subtle details of the vibrant beauty of nature, especially in the enchanting world of Narnia, are exquisitely captured for the reader to visualize. 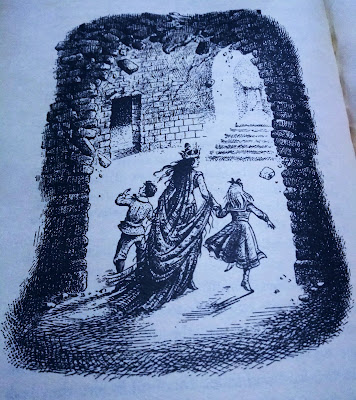 The character of Jadis is sufficiently menacing, cruel  and magnificent. Perhaps, it would have been more enriching for the reader to experience the details of her ruthless destruction of Charn and its people, rather than just the blasé account she gives the children.

The uncle is perfect for the kind of character that unleashes chaos in a quiet world chiefly owing to cowardice cloaked in false bravado. He is annoying and disgusting enough for the reader to loathe him all through the book.

The surprise factor is to have a lion characterized in a completely different perspective, the one of a creator, rather than the destroyer. Further, having a lion that not only communicates in a language that is understood by the children, but also sings a whole lovely world into existence is charming in its conception.

The story draws several comparisons to the biblical concept of how the world came into existence. Aslan refers to the children as descendants of Adam and Eve. Further, Aslan’s prophecy about the complete destruction of earth, as a dire consequence of the actions of mankind is iterated with clarity. This is consistent with the present day situation of the world we live in. Due attention is drawn to Charn, the world of Jadis, that faced obliteration owing to the devastating influence of evil.

The jarring similarity to Adam-Eve story is when Aslan asks Digory to fetch an apple from an apple tree in another world, which is suspiciously like heaven, complete with a golden door and a poetic message to go with it. The character of Jadis also draws parallels with that of the serpent that entices Eve to taste the apple of knowledge. Jadis’s enticing verbal ministrations to Digory are consistent with the poisoning of an innocent mind with honeyed venom of a master manipulator.

The part where Aslan chooses a pair of each animal to be empowered with the gift of communication is reminiscent with the fable of Noah’s arc, where a pair of each species is chosen to be saved from devastation on earth.

It is a surprising twist when Frank is christened as the king of Narnia, by Aslan.  Frank’s supposed transformation from a cabbie to an aristocrat is a wee bit hard to digest, despite the mystical nature of the story. 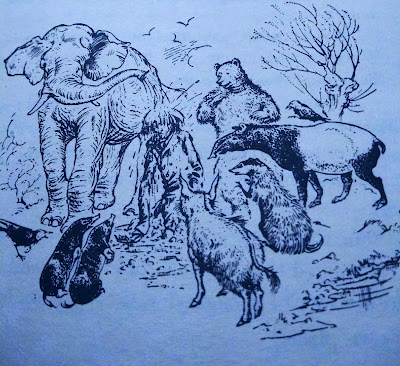 The scene where the animals mistake Andrew for a tree and plant him in the ground is hilarious. Their sustained efforts to make Andrew comfortable by bombarding him with thistles, nuts, worms and a beehive, are an exercise in extreme merriment for the reader.

Overall, a good read for those who enjoy reading stories of magic and surreal mysticism in children’s literature.

Men like me, who possess hidden wisdom are freed from common rules just as we are cut off from common pleasures. Ours, my boy is a high and lonely destiny.’

..you have behaved like a coward, sending a girl to a place you’re afraid to go yourself.

No great wisdom can be reached without sacrifice.

There’s not much point of in finding a magic ring that lets you into other worlds, if you’re afraid to look a them when you’ve got there.’

It’s because you’re a girl. Girls never want to know anything but gossip and rot about people getting engaged. 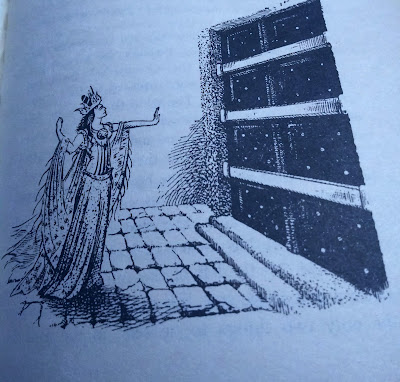 Look well on that which no eyes will see again.

I was the queen. They were my people. What else were they there for but to do my will?

I had forgotten that you are only a common boy. How should you understand reasons of the state?

They are not interested in things or people unless they can be of use to them; they are terribly practical.

‘Laugh and fear not, creatures. Now that you are no longer dumb and witless, you need not always be grave. For jokes as well as justice, come in with speech.

Now the trouble about trying to make yourself stupider than you really are, is that you very often succeed.

‘Why’, said the Bulldog, ‘If a fellow cant trust his nose, what is he to trust?’
‘Well, his brain perhaps’, she replied mildly.

As Adam’s race has done the harm, Adam’s race shall help to heal it. Draw near, you other two.

I know. Grief is great.

It was nice to hear the homely and earthly noises again – the chatter of the river on a stony bed and the creaking of trees in the light wind.

Have you ever bathed in a mountain river that is running in shallow cataracts over red and blue and yellow stones with the sun on it? It is as good as the sea, in some ways, almost better.

‘No thanks, I don’t know that I care much about living on and on after everyone I know is dead. I’d rather live an ordinary time and die and go to heaven.’

Oh Adam’s sons, how cleverly you defend yourselves against all that might do you good!

But length of days with an evil heart is only length of misery and already she begins to know it. All get what they want ; they do not always like it.

..that there might be things more terrible even than losing someone you love by death.

Posted by Chethana Ramesh at 04:54