Book review of ‘One Arranged Murder’ by Chetan Bhagat 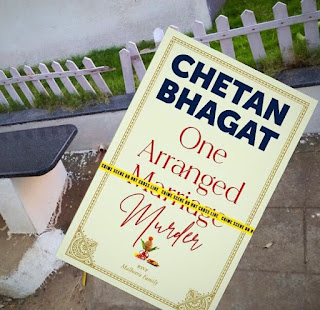 My eighth read of 2021 is 'One Arranged Murder' by Chetan Bhagat. I haven’t read all of  Bhagat's books, but this one kindled my curiosity. While mixed reactions keep floating around the reading community about the quality of his work, I believe that readers must devour all kinds of literature, supposedly good or bad, and decide for themselves.

I admit that I chose to pick it up with zero expectations whatsoever, especially since I hated 'One Night at The Call Centre' for the grossly incorrect, faulty and indecent portrayal of the said industry. I was somewhat surprised by Half-Girlfriend, which I rather liked, as it was a huge improvement from the call-centre one. I read both these books a long time ago.

I did not know what to make of the article in the Times, wherein a Bangalorean lady had filed a lawsuit against Bhagat for plagiarizing her whole work to produce Half-Girlfriend. I’d like to know the outcome of that particular case. And of course, we must continue to read Indian authors and decide their worth for ourselves.

It's refreshing to have two guys as protagonists, instead of the usual couple in love. It's even better to have all additional characters, especially the Malhotra clan adding substantial clout to the proceedings of the mystery. There are ample characters, included as part of a large family, which facilitates the build-up of the mystery behind the murder.

Saurabh proves to be the typical womanizer, even when 'love' is in the picture. The idiocy of a junk food addict is showcased by Golu, while the blow of Prerna's death is somewhat softened by his gluttony.

Typical of some of Bhagat's female characters, at least one of the key women are either chasing men, blowing smoke, doing drugs, guzzling alcohol or all the above. Anjali fulfils all these, and then some.

The story seems ordinary until the first few pages when the murder happens and then catches on with some suspense. The suspense may not seem as much for seasoned readers who read the genre regularly. It may become easier for readers to guess the real killer as some clues are unravelled.

The futile hypocrisies of the so-called elite Indian families are showcased to the last idiotic detail. The bribery-prone police department is not spared either.

This book is so full of mouth-watering food on every other page, it reminds us of the Enid Blytons we devoured during our childhood. It makes us want to reach for junk food every time Golu stuffs himself with yet another goodie.

The process of how the amateur detectives unveil the truth makes for an engrossing read, although the mystery may be deemed rather feeble by thriller-loving readers.

The narrative is simple, straight-forward and easy-going. It is speckled with ample humour and uses interesting techniques to take the story forward. The parts where the interrogation testimonies allow us to understand the minor characters offer a refreshingly different touch to the narrative.

Bhagat cleverly infuses what is termed as 'body shaming' in today's parlance as part of the thought-flow and dialogue of the main protagonist. I had no problem with it as it serves to remind readers to adopt healthy lifestyles in the first place, to avoid ridicule from society and stay fit.

To conclude, I rate the book 4.1 out of 5. Readable, much better than his earlier writes.

Posted by Chethana Ramesh at 09:34