Book Review of 'The Genius of Indraprastha' by Harshwardhan Padole 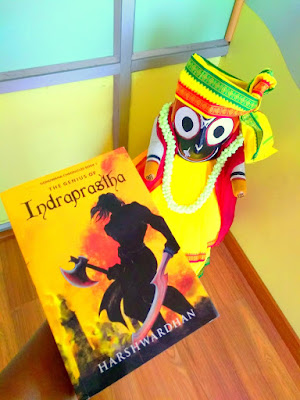 My 18th pick of 2021 is a mythological thriller. This is the first one of this genre I've read this year and I was quite looking forward to it.

This book is rare juxtaposition of history and science, with ample doses of culture thrown in for good measure. I totally loved the references to the ancient wisdom of the Aryans and the scientific genius that is depicted in the warfare sequences of the novel.

The characterization is the biggest strength of the book. It is powerful, relevant and compelling to explore each of them. What I liked most in the story is that all the characters are realistic. There are grey shades in all of them, including the heroic soldiers. Even the great rishis with all their powers are depicted as human, with tendencies towards losing their tranquility in the face of danger. Some key characters appear only in the second half but leave a powerful impact on the story.

Commander Bhakt Khan is the actual protagonist, who takes up more space than the hero of the story, owing to his importance in the proceedings that change the course of history of Gondwana. It is heartening to see how the largely negative character, with his brutality and anger issues, is given ample due in terms of showcasing his valour, bravery, cunning and especially the respect d fear he commands as ‘Abu’ amidst his soldiers. It is interesting how observant readers may notice that despite his immense prowess as a warrior, he wins over his enemies by stabbing them in the back, literally, instead of facing up to them like the brave soldier he is supposed to be.

Martand, the genius hero, appears in full glory only in the second half of the story. It is interesting how his grey shades in the beginning are almost completely reversed towards the second half. Soudamini is charming, and adds the beautiful bonding between siblings. Kuldeep and Ameen are intersting in theri valour and fighting prowess.

The Rishis are my favourite characters in the book. I loved the character of Rishi Satvagyan, who turns out to be a genius and valiant warrior in the climax.

The only challenge is that there are a large number of characters, and hence it is possible to forget some minor ones along the way.

Also, I liked how history is a character in itself, playing a vital role in taking the story forward. There are characters who will have a bigger role to play in the forthcoming chronicles of Gondwana. I am eager to read more about the beautiful warrior Princess Hansika in action in the next book.

The story begins with ample suspense with the usurping of a silver chest by Arab Khidmatgars and the unleashing of terror amongst the Aryans.  The repercussions of this singular event follow, and sustains till the end of the book.

The whole story is rich with history and culture. This elevates the book by several notches. I have always loved studying history and hence I found it interesting to read the aspects of the past that are in the book, even in places where there are detailed historical aspects included in it. However, some parts of the history, especially about the divisions of society could have been trimmed, to render a more compact read.

It is interesting how it is possible for the Commander to emerge victorious only because of emulating the stolen ancient Aryan wisdom.  The same can be said of the counter measures of excellent warfare techniques and inventions by the Aryans who study the scriptures.

Also, the complicated, yet simple technology behind telepathy is convincing. The Aum discs and double domes are enthralling in the power depicted in the sequence. Further, the hot air balloons add a nice twist to the time-versus-distance struggle of the period. The best part is how all of this supposed modern advancement was already existent in ancient scriptures, and yet a large majority of us are largely unaware of them.

It is also endearing that Lord Krishna has found a crucial role to play in the storyline, albeit indirectly.

Martand’s embodiment of the 'Ashwapurak Yantra' -Arjuna’s technique of feeding horses on the run, is another thrilling episode.

The Khidmatgar commander having to take pains to learn Sanskrit to pull off a victory is an ironic, classic touch. The power of Knowledge is not left to the imagination, especially in the turn of events showcased in the story. War scenes are filled with vivid imagery in their ruthless depiction. Reading the book was reminiscent of the blockbuster Bahubali II in the technology used during the war.

The story is thus a thrilling celebration of ancient wisdom, which is undermined and ignored in the modern era of technology.

The narrative is simple and easy to follow. It is also fast-paced to retain the interest of the reader. The chapter names allow a forewarning of what is to come, but retain the suspense of how the events come about. Some of the dialogues are peppered with small Sanskrit sayings that are a joy to read. There are ample translations for these. What I liked was how the Khidmatgars who do not know Sanskrit perceive them as ‘symbols’, which is hilarious.

The only grouse I had was that the editing team of the publishers should have been a lot more vigilant. Grammatical aspects, such as articles and tenses, could have been taken care of with more care. Definite articles are especially missing in the narrative, in most of the lines. Had this aspect been addressed, the book would have been elevated to a higher level of Historical literature.

I rate the book 4.6 out of 5. Extra points for the delicious depiction of scientific warfare during the crippling challenges of the ancient times. A must-read for historical thriller lovers. Will definitely watch out for the forthcoming books in the Gondwana Chronicles.

Found my review awesome? Follow my blog for more insights on the books I read through the year.

Posted by Chethana Ramesh at 02:45