Book review of ‘How About A Sin Tonight’ by Novoneel Chakraborty 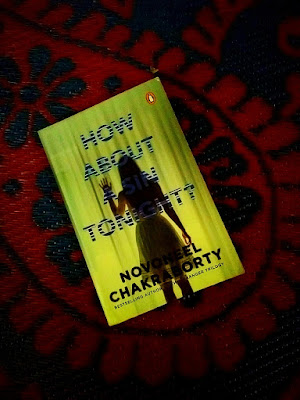 This is my seventh read of 2021 and second book of this author. It is similar to the earlier read Half-Torn Hearts in most aspects of narration and story-telling acumen. However it is different in that the characterisation involves multiple layers and flashbacks in a back and forth narrative, to take the story forward.

There are multiple key characters whose lives intertwine with one another at different points in their lives. The build-up of suspense is good, because the flashbacks unpeel the characters and storyline, layer by layer. The characterisation delves into intricacies of film-making and challenges of the actors, especially their mental thought flows.

Spoiler Alert: I found a minor character an interesting  case study, because she has no qualms whatsoever, in stealthily reading highly personal love letters of her current acquaintance. More curious is the fact that he doesn’t seem to mind, and then actually ends up with her.

The story brilliantly chalks out the lives of multiple ambitious people whose love-lives entangle with their professional pursuits, leaving behind varied degrees of heartaches, betrayals, recoups, violence and death. It is a study of different facets of human character that try to balance career ambitions with matters of the heart.

The curious part is how most of them end up sleeping with one or the other, in some twist or turn of heart, mind or simply a casual acquaintance. One wonders at this 'filminess' of the film industry, as depicted by the story.

The narrative is interesting because it delves into the minds of all the key characters and gives us a clear perspective of each of them. It is a curious mix of fantastic quotes, as part of the dialogues and also some parts which are a blasé narration of events. Some dialogues are a wee bit too long in a few places, but offer a more detailed insight into the thinking of the characters.

The language is also a mixture of brilliant paragraphs as well as passable lines. Some parts of the story narration include phrases such as ‘ ...she fucked her brains out...’ which make us wonder if better linguistic choices could have been employed, while conceding that this is the perhaps the everyday language of the average English-speaking masses.

Some italicised portions, especially the series of letters are rather long, running into a dozen pages or so, which might be a little hard on the eyes of readers.

If you find my review useful, do follow my blog for more.

Posted by Chethana Ramesh at 05:01