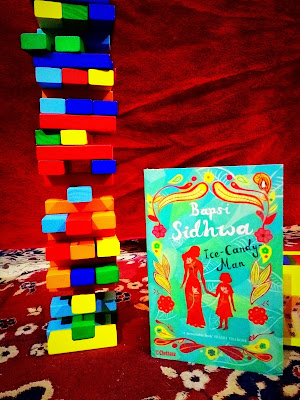 This is the third book I’ve read, based on the theme of the partition of India, in addition to 'Midnight's Children' by Salman Rushdie and 'Tamas' by Bisham Sahni. This novel is entirely different in all aspects, except for the religious divide the partition brought about and the consequent violence it resulted in.
Bapsi Sidhwa’s story is interspersed with multiple themes. The key ones have been summarized in my review below.

Introduction
It is achingly easy for a child to lose the quality of innocence. Sidhwa’s protagonist slashes into the mind of an adult reader with a compelling mix of inevitable horrors: the erosion of the child’s naiveté and the unveiling of a juggernaut of events, that leave readers gasping to cope with the monstrosities of mankind.
The first thing that one notices in the book is that the child narrator is too smart for her own good. Lenny is not childlike in her eloquent, elevated language or keen observation, comprehension and conclusions she draws about adult behaviour. Adults can be really stupid when it comes to children. It is stunning how they underestimate the intellectual capacity of children, when they speak or behave in ways that are typical of them. It is only towards the fag end of the novel that Lenny is spared the gross details of a few horrors that are too perturbing for a child’s psyche to be thrust with.
Some parts of the story do not ring true at all. Lenny’s grandmom assumes a high power, with powerful strings in Lahore’s society. She pulls off bureaucratic wonders that perhaps seasoned politicians may find hard to achieve and is able to locate kidnapped women, as well as pack them off to India.

The Title: Ice Candy Man
Why did Bapsi Sidhwa name the book ‘Ice Candy Man’? The key story is about Lenny, the Parsee child. It is about the consequent aftermath of the partition of India in the last century. It is also about Lenny’s 18-year old Punjabi Ayah who becomes a pawn in the ego games of a deranged man and a victim of religious fanaticism that leads to her disgraceful kidnapping and subsequent ruin. The ice candy man is only one of her many suitors, who vies for her attention. In fact, it is the masseur who assumes more importance as Ayah’s lover. The gardener Hari, the Sethi cook Imam Din, or the low-caste sweepers Muccho and her daughter Papoo are also given ample importance in the first half of the book. Further, Lenny’s friend Ranna’s story takes considerable precedence in the middle portions too.
Hence the reader waits for the Ice-candy man to assume more importance, given the title. It is only towards the kidnap and the end, where he repents his actions that he takes centre-stage. The tilte therefore may be a little misleading for readers who assume that he is the key character throughout the novel.
I was surprised because of the obvious twist wherein the Ice candy man is depicted in shades of grey (or even black) in the story. He is a stalker of dangerous proportions and suffers an obsession of manic magnitude for Ayah. His demonic treatment of Ayah during and after her kidnapping, where he pimps her for money is disgusting to the core. Although some readers may want to term his behaviour as stemming from ‘love’, he is an obvious case of a person who is psychologically deranged. It is only in the end when Lenny’s grandmother accosts him severely that he breaks down and appears to repent. How then, does such a character deserve the titular honour, in a story narrated by a child? It leaves a distinct bitter feeling in the mind.

Theme of Human Psychology
Disturbing, heart-wrenching scenes complement irksome incidents to the core.
The disturbing scenes are those which remind us that human beings have latent demons buried within their psyches. It only takes the right trigger, opportunity and endorsement from fellow demonic humans to let the demon loose on their victims. Religion, politics and gender serve only as mere excuses that alleviate the allowing of such humans to wreak havoc on society.
Ice candy man who claims to love Ayah causes her devastation. He is deranged with hatred for Hindus after he witnesses the train from India, with mutilated Muslim bodies. He pimps her to other men to make money, despite claiming to love her. The warped sense in which his so-called love is portrayed towards the end does not match up to his earlier behaviour.

Theme of Religion
The partition of India unleashed horrors on both sides of the border. Sidhwa’s story revolves and culminates in Lahore. In showcasing the leading up and aftermath of the partition on the Hindus and Muslims alike, Sidhwa brings out the fear, uncertainty and grave dangers that Lenny’s family.  In doing so, the readers are aware of what Hindu and Muslim families in the region, alike would have suffered during the time of the partition.
The keen observation of the protagonist offers us the chance to comprehend the changes and effects of the partition at the ground level, amidst the common man. How families and livelihoods get disrupted, along with the loss of life, property and peace is showcased with the perceptive clarity of a child.
The most irksome scenes are the ones where Lenny’s cousin repeatedly takes undue sexual advantage of her innocence although Lenny is smart enough to avoid too much damage.

Theme of Innocence
As mentioned in the introduction, Lenny’s aching innocence is slowly, but surely corroded with the horrors that she is forced to witness. Her keen observation does not miss the changes that happen around her during the time when the political situation of the country undergoes massive change. Lenny sees, records, learns and continues to learn. Each revelation is another slice chopped off her childlike innocent mind. The first time she hears of the brutal murder of someone she knows, (a British policeman, a family friend who visits and interacts with her parents over dinner) causes in her the realization that the horror of violence is more powerful when it hits closer to home, on a personal level.
The most perturbing scenes are the ones when she watches the massive fire that destroys the Hindu settlements at Lahore. The worst one is when she comes upon the mutilated body of the masseur on the pavement near her house.

Theme of Betrayal
Lenny first tastes betrayal as a child after her painful operation to rectfy her polio. Her parents fool her into the belief that her father goes to fetch her doctor to alleviate her pain, while all he does is sleep in the adjacent room.
The bigger betrayal, that is a major turning point in the whole novel, is when Ice candy man betrays Lenny’s friendship when he shrewdly wins her trust and weans the Ayah’s hiding place from her.

Theme of Guilt
Lenny’s guilt after she inadvertently betrays Ayah’s whereabouts to Ice Candy man are heart-racking. The irony, where she punishes her own tongue for being truthful, burns into the mind of the reader.

Theme of Politics
The common man is a mere puppet at the hands of those who wield the strings of political power.
The so-called leaders of the country, together with the British deal out cities like a pack of cards and divide the country based solely on populace and boundaries, with no regard to the sentiments or livelihood of the people. How different is the situation today? Do the leaders of either country truly care about the sentiments of its countrymen while taking crucial decisions that affect their daily lives? Food for thought, indeed.

Theme of Death and Danger
The scenes where Lenny’s friend is grievously injured and left to die, and his subsequent escapades from the bloodthirsty Sikhs to return to his aunt keep readers on the edge of tension. The dangers are not limited to a particular community. The underlying irony that all humans behave the same way when it concerns love, religion, or violence is not lost on readers. The danger does not lie in politics or religion. It  lies amidst us, in the psyche of the common man who is inflamed by people, dialogues, visions and events around him, that causes him to behave in unnaturally violent ways.

Theme of Sex, Assault and Violence
A recurring theme throughout the novel, the assaults are both physical and sexual, and not limited to a single gender or even age. Ayah is groped by her friend and sexually assaulted multiple times after her kidnap. Thankfully, the reader is spared of the gross details owing to the age of the narrator. The ice candy man’s toes and their twitching is hilarious and annoying at the same time.
Lenny’s cousin may qualify as a sexual predator too, despite his young age, with his highly questionable actions with the five year old Lenny that extends to his shameless groping of her, as an eight year old girl. His shrewdness in milking every opportunity to take undue advantage of her innocence is infuriating in its objectionable recurrence. It is perhaps prudent to acknowledge that children may satiate curiosities and discover the word of sexual joy through experimentation such as this, however, adult readers generally tend to find the articulation of such actions by children loathsome and unsavoury.
The attack on Ranna is described in the context of extreme violence that is punctuated by mass murder of menfolk and rapes of the captured women. Scenes that describe the outcome of the mob attacks are gory. So does Muccho’s violent ill-treatment of her own daughter Papoo. The abusive language leaves a gash in our minds, as does the description of the episodes.
Another scene that stays in the mind is the one where the ‘firefighters’ arrive to contain the fire at Shalmi,  douse the neighbouring Hindu homes with petrol instead of water and cause an inferno that destroys their settlement of Lahore.

Theme of Wry Humour
Last, but not the least, Sidhwa infuses humorous interludes in the form of Lenny’s dialogues. Names like Slavesister and Oldhusband put smiles on our faces, even as Lenny proceeds to dissect the background of their titles, in her narrative. Lenny makes life simple for herself and refers to the characters as cousin, masseur, gardener , ice candy man, etc. Also, the sheer stupidity of adults who go about gossiping, ogling, groping and lovemaking in the presence of an eight year old is not lost on the readers.

Conclusion
While there have been quite a few books about the partition, this one stands out in its presentation and treatment. The combo of a child protagonist narrator and the theme of partition, juxtaposed with familial, psychological and religious brouhaha make the novel a compelling read.
I rate the novel 3.8 out of 5.
Do you agree with my review? Let me know in the comments. Do like and share it with readers and book-lovers too.
Until my next review, happy reading!

Posted by Chethana Ramesh at 18:22