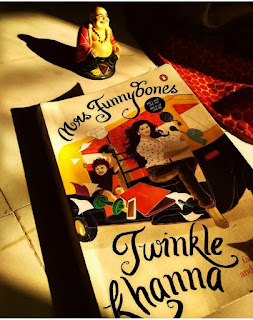 It was mid-February already and I'd only read two books until then. I know that sounds pathetic, but then, I did read 2 books in a row the previous day. And this is exactly the kinda light reading I pick up, in between reading hardcore thrillers. Breezy books allow our minds to 'cool-off' from the hard, gory, suspense that churns the grey cells into mush within the skull.

I was halfway through a thriller by Dean Koontz & picked this one up, to allow my haggard brain to recoup.

The first thing that hit me when I began to read Mrs. Funnybones, was that I'd read some of it before. I then remembered that I had indeed come across the same paragraphs in her newspaper articles already. I realized that the book was probably a compilation of some of her articles that were published on her columns in the Times.

I had the pleasure of listening to Twinkle Khanna speak her heart out at the Bangalore Literature Festival and she did repeat some beautifully rehearsed portions of the more humorous parts of her book. She began with her signature introduction of herself including her family & pets, and her whole chat with Darius Sunawala was interspersed with portions from this book (although she was there to promote her next book 'The Legend of Lakshmi Prasad').

What strikes you the most about her is the candidness and lack of decorum, so to speak. Here is one star who blatantly refuses to be politically correct, and that in itself a breath of fresh air in an industry filled with spineless bimbos. She has no qualms about mocking the quirks of society, her family, especially her own superstar mom and true to her name, all of this is woven with dry humor and irrepressible wit.

Mrs. Funnybones is a book that most Indian women would connect to, even as they nod vigorously, smirk, giggle or burst into outright laughter at some of her observations and anecdotes.

One has to remind oneself that she is talking about the star Akshay Kumar, when she brazenly refers to him as the 'man of the house'. Or that this woman who discusses everyday problems like any other middle class housewife is actually a Bollywood star. So, a superstar's wife faces almost the same trials and tribulations as does an average Indian woman...or so Mrs.Khanna would have you believe. Food for thought indeed.

There are instances in the narrative that makes you do a double-take. Like the part when she claims to have taken her baby to the loo in the airplane to check on a soiled diaper. Really? And we thought our stars hired a fleet of maids for such mundane things such as changing baby diapers.

The portions where she points out the futility of fasting for the husband on Karva Chauth takes on a note of wry humor when she backs it up with research data. And yet, one cannot help notice that she appears to follow all the said rituals that she vehemently scoffs at.

Lemme tell you what I found most hilarious/bang-on/profound in Twinkle Khanna's debut offering.

A wise woman keeps her hands firmly in her pockets & does not accidentally unzip anything, including her mouth.

Box people who undergo liposuction & claim how they lost all their weight just by eating three healthy meals & two nutritious snacks every day.

Box people who post minute-by-minute updates on Facebook depicting every detail of their December getaway. There are only so many 'Gee my life is wonderful' statuses that other people can bear.

They won't arrest scores of men who publicly unbutton, unzip, pull out their dangly bits & proceed to urinate on a wall right outside the police station, but for reasons still unknown to me, opening a single top button has become the crime of the century.

We come from darkness, live for a short while in a blaze of light & sound and go back into darkness. Yet day after day, we go on pretending that we and our loved ones are immortal.

..trying and holding on are complicated & challenging things, but the most difficult thing in life is to love fiercely & then let go.

I'm rather relieved that the plagiarism specialists of the tweeting community have not copy-pasted these lines as much as they'd be expected to. I hope these quotes don't end up on Twitter as 'self-made quotations', as much as Paulo Coelho's words do.

There's a lot more to glean from this book, but I figure Mrs.Funnybones may prefer that you buy her book, instead of reading it all here for free.

Posted by Chethana Ramesh at 10:54