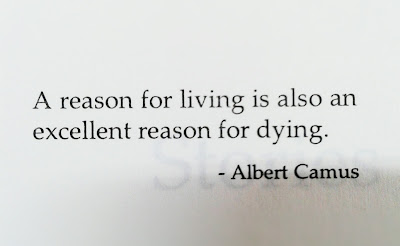 Have you ever felt like you don't know where you're going, or if you're making any progress at all in your career or your life? If so, you were most likely having an 'existential moment.'
Existentialism is a philosophical and literary perspective that focuses on the experience of an individual person and the way that he or she understands the world.
Absurdist fiction is a genre of literary fiction that focuses on the experiences of characters in situations where they cannot find any inherent purpose in life, the philosophical condition of being ‘nothing.’
The hallmark of the genre is the study of human behavior under circumstances (whether realistic or fantastical) that appear to be purposeless and philosophically absurd.
Absurdist fiction posits little judgment about characters or their actions; that task is left to the reader. Also, the ‘moral’ of the story is generally not explicit, and the themes or characters' realizations, if any, are often ambiguous in nature.
The theme is inspired by the French philosopher, Albert Camus who published his manuscript ‘The Myth of Sisyphus’. Camus considers absurdity as a conflict, a confrontation, an opposition, or a divorce between two ideals.
The human condition is absurd, the confrontation between a man’s desire for significance/meaning/clarity and the cold, silent universe. There are specific human experiences that evoke notions of absurdity.
Such a realization or encounter with the absurd leaves the individual with a choice: suicide, a leap of faith or acceptance. Camus concludes that acceptance is the only defensible option. The leap of faith is ‘philosophical suicide.’
A man can choose to embrace his own absurd condition. Man’s freedom and the opportunity to give life meaning, lies in acknowledgement and acceptance of absurdity. If the absurd experience is truly the realization that the universe is fundamentally devoid of absolutes, then we as individuals, are truly free.

“Thus, I draw from the absurd three consequences, which are my revolt, my freedom and my passion.

By the mere activity of the consciousness I transform into a rule of life what was an invitation to death and I refuse suicide.”

-   Albert Camus, The Myth of Sisyphus

“When there are no more problems to tackle in life, life becomes completely meaningless.

Life without challenges, is equal to death”

This short story is based on the theme of Absurdist fiction/Existentialism, where the protagonist exists in a meaningless state of mind and yet, submits to it, accepts the same and eventually finds a way out  of it.

A simple word it was.

A complicated word it was!

A million questions within the question. A billion ‘whys’, within the ‘why’.

Which of the questions were more important now?

Why was I even alive?

Why wasn’t I dead yet?

Why was I spared?

Why me? Why only me?

Why did they all have to go before me?

And the baby! Akka's little infant's half-burned body had been found under the suitcase with silk sarees. It had fallen from the racks above the seat they had chosen for them, because it was ‘safer’ in the front.

Why had they even gone on that wretched tour? Why could they have not stayed at home? Why did the whole family decide to travel all at once? Why didn’t they chosen a better vehicle, a better travel agent?

Why hadn't they heeded the warning of that old sweeper at the guest house they had stopped at, the previous night? Why didn’t they take him seriously, when he told them that those roads in the Western Ghats were treacherous for their landslides at this time of the year?

Why did they choose to travel to Tirupathi during the monsoon?

Why did the divine Lord of the Seven Hills decide to take them all away, soon after he gave them his blessed darshan? Not even an hour had passed since they started out for Mangalore…never to reach their earthly abode called home…

Why had I been unable to move or react, when I felt the huge vehicle tilt on its side, as if in horrific slow motion? Why did I see the gaping gorge rise up towards me through the open door of the bus, and yet, not even let out a scream? Why did I freeze up like a dead statue, at the time of absolute peril?

Why had I lost consciousness after I felt that bump on the back of my head? Why did I wake up to eerie stillness, without even realizing that I’d fallen 16 feet into nothingness?

Why was I the only one to be thrown out of the ill-fated vehicle, only to land on a tree branch, with minor bruises to show for it? Why was I rescued by passing villagers, while the bus, with everyone else still inside its deathly confines, rolled further down, 32 feet into the chasm and go up in flames at the bottom?

Why was I, Ganesh Arumugam, MBA, Senior programmer in HP, chosen to be the sole survivor of the most horrific accident of the decade?

But here I am! Alive and well. Barely bruised.

Why was I spared? I have no family to call mine anymore.

The small voice was barely a little more than a whisper. I ignored it.

A tiny hand tugged at my shirt sleeve.

I stared down at the brown little hand, before my lashes to focus on the watery eyes that gazed dolefully into mine.

Why did I have to bring this child home with me in the first place?

Why did I even follow the ‘rescue’ team to the morgue in the Government hospital, on that fateful day, with the charred, ghastly remains of some of my family?

Why had I noticed this child sitting cross-legged next to the two cold, steel containers that housed the bodies her parents? Why did she look up, to lock her unblinking gaze onto mine? Why did she smile at me?

Why then, did my numb mind find a semblance of normalcy in that guileless smile?

Why had I asked her name? And Lord Venkateshwara, why did she reply ‘Navya’!?

Navya…The new one...a new beginning…a wonderful name, I’d insisted as being perfect for the new member of our family. The name I had chosen for Akka’s baby, my lovely niece, who perished in the accident…

Why does fate play such cruel games with us mortals?

I felt a teardrop land onto my upturned wrist. Navya still stared at me, but the tiny droplet had escaped from beneath her lids.

She put her thumb into her mouth and began to suckle on it with an audible sound.

I was jolted out of my reverie of ‘Whys…’

Why was I alive?

Her eyes held the famished look of a child who has lost everything. Those bottomless dark pools, still shone with the light of hope. Hope…

Hope…that the gangly fellow who picked her up from the morgue, would protect her from the cruelty of the world. Hope, that the 34-year old guy who’d adopted an orphaned child and brought her to his modest two BHK flat in Chennai, would raise her as his own daughter…

I smiled at Navya, even as I allowed unabashed tears to flow down my five-o-clock stubble. I pulled myself up from the wooden rocking chair that served as my faithful brooding companion every evening, to switch off the fan.

She slid her tiny hand into mine and skipped along to the door, dragging me behind her, wiping her eyes with the knuckles of her other hand.

“Come, let’s go out for dinner, you like Chinese food, don’t you?” I chuckled.