Book Review of 'Finding a Measure of Her' by Akshobhya 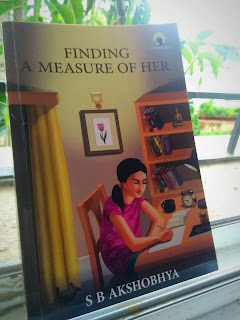 This is a different book from those I’ve read in a long time. The blurb had already suggested that it would be so, and I picked it up because it promised a woman-centric story and an intriguing one at that. I was not disappointed on either counts. The story is refreshingly new, unlike the usual run-of-the-mill ones that we get to read. Also, I liked to read a story set in Bangalore, with mentions of some favourite streets of the city scape.

The story does not begin with the protagonist Nyasa, though, until a while into the book because the setting is explained in great detail – The Udbhavana society. It is a learning experience for readers who may not be aware of the lifestyles of the uber rich of society.

The teenagers seem to have nothing better to do in life than shop in hyper expensive showrooms or worse, light up cigarettes and guzzle booze every hour of the day. The depiction of the inner world, reminiscent of inside information is such that one has to keep reminding oneself that these characters are underage teenagers, blowing up parents’ moolah and not seasoned adults, who earn what they spend.

The lesbian scenes are no different from any lovemaking between a heterosexual couple in love, except that the dominant teenager Suganya is all but sixteen, however, she is shown to possess the wooing confidence and sexual prowess of a middle-aged adult and then some. The submissive protagonist Nyasa being older than her partner adds on to the premise - the tendency of money-power and social status playing as much a role in the equation, as love.

The contrasting divide between the sections of society is showcased with finesse. Education which is a boon and requirement for the middle classes to improve their lives is only another hassle to be endured as a namesake for the rich. The natural tendency of the rich to exploit those who are less privileged as an entitlement of merely being born into wealth, brings out the helpless submission of the latter to the ministrations of the providers. This is well documented in the storyline at regular intervals.

Also, the step mother’s sudden turn of heart in the second half may be a little unconvincing, but highly endearing. It is interesting how characters that have potential to turn grey at any point, end up shining beyond the expectations of the reader.

Overall, a different read with a varied approach towards the quirks and foibles of society, while reinforcing the goodness of human character.

Did you find my review useful? Do follow my blog for more

Posted by Chethana Ramesh at 05:01