Book review of ‘God Help The Child’ by Toni Morrison. 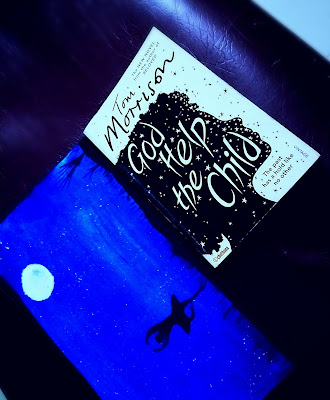 This is my second read of Toni Morrison, the first one being ‘The Bluest Eye’, so I knew what to expect: A deep story, that delves into human psyche and showcases heart-wrenching racism, with a good dose evil pedophile human psychosis.

I wasn’t surprised, and yet, I was moved. Morrison gives us all the above and more. There is also love, discovered, lost, tortured and rediscovered. Most important of all is the additional takeaway: How some events of turbulent childhood leave permanent scars that ruin adult relationships.

Racial discrimination and abuse leads a mother to hate her own child. The extremely dark child born to coloured parents, causes a permanent rift between the couple and damages the psyche of their little child. The child craving for a mere physical touch of holding hands with her mother, becomes the catalyst that puts an innocent woman in prison for 15 years. The child grows into a woman, who is unable to come to terms with her guilt and is attacked when she tries to make amends with the innocent woman she sent to jail.

A student is traumatized in his childhood, by the murder of his brother by a pedophile predator. He carries the burden of the loss well into his adulthood and allows it to ruin his present relationships.

Will the two be able to get past their pasts and slay their inner demons? That forms the crux of the story.
The book is divided into four parts. The division of chapters is conducive to better comprehension of each character, because she devotes a separate chapter to each key character, even minor ones.

The main aspect that I love about this novel is the way Morrison lets us delve into the mind of each character, offering us complete clarity about their actions. Even better is the way she builds ample suspense and then unveils each person’s mind, layer by layer.Also, the characters have interesting names.

The transformation of the protagonist from the oppressed Lulu Ann to the successful sophisticated Bride is a fascinating one. It is imperative to note how well Morrison highlights the beauty of the blue-black African woman, with visual imagery. This is more pronounced when Bride shines with zero makeup and jewelry embellishments. Also, Bride's journey of realization that beauty is indeed skin-deep, and that material wealth does not ensure happiness, is enlightenment for every person who is unable to concede to the basic tenets of life.

Carrying burdens of the ghosts of the past ruin the joys of the present. This is brought out effectively through the traumatic journey of Booker, Bride’s partner. His realization that comes only after more loss, sets him free of his childhood demons. The mind of an artist who finds release in music and literature is endearing to absorb through Booker’s character.

Sweetness, is Bride’s mom. Although the main cause of all the mishaps, reveals her side of reasons for her actions. The large role played by racially discriminating society in destroying love and relationships, including the pure love between a mother and child is showcased by her. Her guilt comes through palpably when she continues to try and convince herself that it is not her fault. She redeems herself somewhat, towards the end when she recalls her behaviour and regrets her treatment of her only child.

Queen Olive is vibrant, eccentric and vivacious, who makes maximum impact in the minimum pages that she appears in. Her musings offer us life lessons that may hold us in good stead in relationships, for life.

Brooklyn, Bride’s friend is an interesting character, mainly because she is realistic. A good friend who turns up when required, but whose loyalty ends where seducing her best friend’s lover begins. She allows us a peek into the real character of Booker, who until then, remains a hooded entity, and foreshadows a positive trait in the initially pejorative perspective the story gives readers.

‘God Help the Child’ is a saga of guilt, loss and redemption. It is also a mirror of the consequences of evils like racism, child sexual abuse, murder, and suffering of innocents in a flawed society.

A must read that reminds us that racism is not a thing of the past, even today. Nor is it confined to any particular country. Activists are still crying themselves hoarse trying to change the flawed perceptions of beauty, especially pertaining to women.

The irony of having a black protagonist being a corporate success with her own beauty line, with a name such as YOU, GIRL, is not lost on the reader.


Did you find my review useful? Do let me know in the comments.

Thank you for reading, visit my blog again for more reviews of my reads. Happy reading!

Posted by Chethana Ramesh at 08:21