Book Review: The Last of the Mohicans , by James Fenimore Cooper. 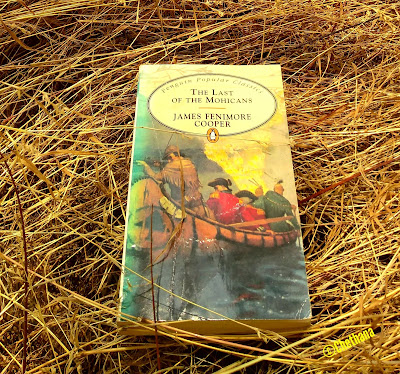 This is one of those books that puts you off on page one, because of the extensive verbiage, but grows on you as you get on with reading it. I’ve always wanted to read this novel, but I must admit I struggled through the first couple of pages until I let myself get used to the language and flow of narrative. And then, I was hooked, and how!
The story is filled with one enthralling adventure after another, set in a forest, no less. Add caves, waterfalls and rivers to this setup and we have the perfect recipe to relish some enticing escapades. And the protagonists take up a journey fraught with danger, spiced with pursuit, fear, emotions and gory battles. Two maidens escorted to safety by a small group of men, both natives and Americans, through a dangerous forest while fleeing for their lives from savage pursuers - this makes for an action-packed story-line indeed.
What adds an amorous touch is the romance between not one, but two couples. This is even more enticing because the couples are so different from one another. Cora Munro and Uncas, the Mohican, charm us with their guarded strength while Alice Munro and Duncan Heyward are the quintessential romantic couple who are portrayed in many a traditional love story. 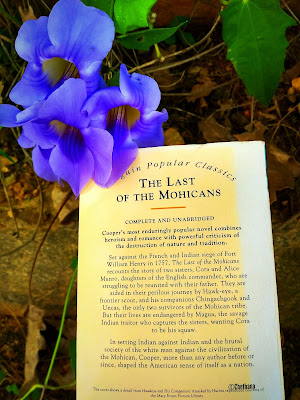 The main protagonist is a study in human nature. Hawkeye, as he is known, gives us a feeling of being the mouthpiece of the author. On one hand he is friendly and gets along like a house on fire, with Chingachgook, the older Mohican and his son, Uncas, the last of the Mohican race. On the other hand, he does not support the possibility of a romantic liaison between Uncas and Cora, owing to racial reasons. He wows us with his extraordinary, adroit shooting skills with his rifle, interestingly called 'Killdeer'. He charms us with his knowledge of the frontier terrain and uncanny prediction of enemy moves. And he also makes us wonder why Cooper did not choose him to be one of the two romantic heroes of the story.
Uncas completely wins us over. He easily overshadows even Hawkeye, with his unbelievably precise tracking and detection skills in the forest. The scenes where he uncovers lost trails of the kidnapped women are stunning in their descriptive complexity. His death at the end seems like a waste of such fascinating character-building, but then, that’s what elevates a tragedy from mediocre to excellence.
Cora is a heart-winner. Her bravery during crisis, her love for her sister and her clarity of thought and action, effectively serve as a powerful contrast with the weakness of Alice. But then, I was disappointed when she begs the native leader Tamenund for freedom and then meekly submits to the villainous Magua in the climax when he kidnaps and threatens her. Her character in the beginning seems to suggest that she would pick up a sword and fight her tormentors, instead of the timid submissiveness.
Duncan Heyward is silly at times, with his typical captivated-paramour behaviour. His lover Alice is sillier, with her weeping weakling character, though she perfectly fulfills the role of a damsel in distress, giving Heyward the opportunity to be her Knight in shining armour. Heyward does win us over with his acquired bravery when he volunteers to save Alice from the clutches of the enemy.
Which brings us to Magua, the antagonist. He is truly impressive, in his cunning maneuvers throughout the story. He is a perfect match for the skills exhibited by Uncas and Hawkeye. Although he is showcased as the epitome of evil, one must realize that his affection, perhaps love for Cora shines through, especially in the climax when he does not kill her. His enraged attack of her killer corroborates the same. His redemption also lies in the fact that he does not hurt or harm his female captives, despite ample opportunity to do so. An in-depth analysis of his powerful leadership and oratory skills would teach us a few lessons on influential techniques of modern team management.
The other characters like Munro,  Tamenund and Gamut have important roles to play as well. Munro as the father of the abducted girls, gives the readers some rich parental emotions to savour. The calvinistic psalmodist David Gamut who is shown as rather unimpressive in the beginning of the book, does impress us along the way, especially since he risks his life to save the others and actually manages to stay alive in the bargain. Tamenund, the ancient sage, disillusions us with his verdict that allows Cora to be fetched away by Magua, but his role is important because he explains the importance of the title of the story in the end. 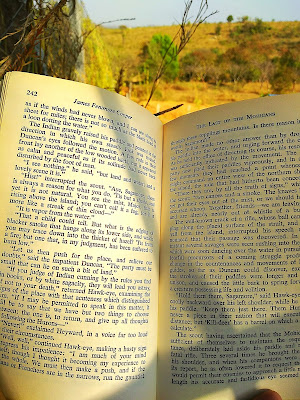 The significance of the novel in American history is more pronounced by the footnotes that Cooper has offered in the book at regular intervals. They add an intriguing element of historical truth that separates fiction from hardcore facts about the geographical and historical magnitude of the places and events he mentions. I normally do not have the patience to read footnotes, but this time I devoured all of them with elan.
Also, the narrative ‘talks’ to us directly, in many chapters. It is as if Cooper reaches out to us to ensure that we get the complete feel of what he is trying to convey.

Thrilling & Impactful Scenes
Some scenes are exhilarating in their detailed imagery. I actually held my breath for many seconds when Cora and Alice almost escape from the Hurons inside the cave. And then I released an inward groan, when they get captured by the wily Magua. That is easily the best scene in the novel, worth all the hardship of trudging through the difficult frills in Cooper’s language. 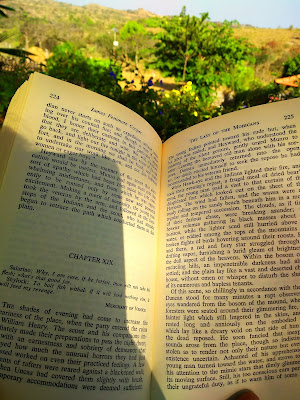 Another scene that is impactful is the one in which a cunning Huron manages to fire at the hidden captives from atop a tree. And then, the excruciating image of the wounded man hanging by a single limb from a branch, until Hawkeye shoots him in compassion keeps us on tenterhooks. Here, the bitter irony of sympathy and mercy that encourages killing of another human being is highly palpable.
The part where an infant is smashed to death, before the mother is pierced with a tomahawk for a mere piece of clothing, stays in the reader’s shocked psyche.
Yet another impactful scene is when Gamut saves himself from certain and violent death by breaking into a song, amidst the savagery of the battlefield. The descriptions actually shows us the tribes being enchanted enough to spare his life, multiple times in the story.
Some far-fetched episodes make the narrative filmy. However, they may serve to balance the gory descriptions with some comic relief for readers. A man disguised as a bear or a beaver makes one wonder at the authenticity of such a possibility, especially when it suggests that seasoned aboriginal forest dwellers are actually fooled by the masquerades.

Rating
Don’t miss the book. It may seem hard to read, especially in the beginning, but trust me, it’s worth it.
Cooper’s genius in juxtaposing true history with fictional romance, adventure and thrill deserves a 4.7 out of 5.
Did you find my review useful? Do let me know in the comments below.
Until my next offering, Happy Reading, Bookworms!

Posted by Chethana Ramesh at 10:02