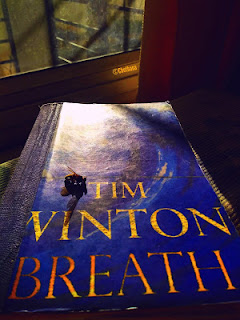 While my lungs turn into sponge
and the ocean inside me
flickers with cruel light.
Drowning. Drowning.
Fighting it.
But Drowning.

People are fools, not monsters.

The story begins with Bruce Pike, a paramedic who receives a call to the site of a teenage suicide by asphyxiation. This sets off an array of nostalgic memories of his own teenage for Bruce that forms the premise for the whole novel.

His lifelong relationship with the ocean begins with learning to swim in the river and he goes on to become a seasoned surfer in the wildest waters of the sea.

Life in a small town called Sawyer, where he grows up gets increasingly boring for the boy who revels in the sheer thrill, excitement and compelling pull of danger, that grows on him as an addiction that he cannot live without. Even when his parents try to wean him away from the influence of the sea, by enrolling him in school 30 miles away in Angelus, after he defies them to surf, he is hooked hard and fast to the pull of the treacherous water.

Accompanying Bruce in all his adventures is his friend Loonie, who is driven by a near mania to sport with danger. Their roguish habit of trying to hold their breath underwater, in their bid to outdo one another holds them in good stead when they are out at the mercy of a turbulent sea.

They come under the tutelage of a celebrity surfer Sando, who takes them under his wing and compels them to soar into new heights of surfing at sea. The three of them form a kind of cult that other surfers are in awe of.

The boys keep a distance from Sando’s wife, Eva, as she makes no bones of her disapproval of their proximity to her husband. Much later, the discovery that Eva was a champion skier who has lost her skiing dream, after an accident changes his perception towards her.

Loonie’s frenzied energy and love for danger outdoes his fear, and affects Bruce in more ways than one. Loonie fractures his arm at a crucial time when Sando decides to take them to an exotic location, Old Smoky,  to try a new surfing experience for the boys. Loonie’s intense envy and subsequent rude put-down of Bruce drives a wedge between the already strained relationship between the boys.

Sando is disappointed with Bruce’s fear at Old Smoky and although he deals with Bruce's anxious cowardice with mature understanding, it drives him to choose the wild Loonie over Bruce during subsequent trips. This drives a distance between the boys and is the beginning of the demise of the friendship between them.

Bruce becomes increasingly depressed. His ‘moody, selfish and inattentive’ attitude loses him his girlfriend Queenie. Bruce however, is rather comforted to be relieved of his duties as a boyfriend.

Just when Bruce assumes that he has made headway with Sando by getting a little closer to him, he is crushed to discover that Sando goes off to Bali out of the blue, with Loonie, with neither of them even informing Bruce of their plans.

The final nail in the coffin is drawn when the three of them go to surf a thrillingly dangerous new break called Nautilus and Bruce is unable to forego his fear, which disgusts Sando and driving them both further away from Bruce.

Being sidelined by Sando over Loonie has a profound effect on Bruce. His confidence takes a nosedive into loneliness. It drives him to risk his life attempting to surf Old Smoky all by himself and he loses Sando’s surfboard while trying to tackle the stormy sea, forcing him to swim many miles back to shore. It causes Sando to seek him out at school to inform him the his board was found by a fisherman twenty five miles out in teh ocean. Sando heaps praise on Bruce and gifts the surfboard to Bruce as a gift for the effort. However, it is already too late for Sando to regain the worship that he previously enjoyed from Bruce. Soon after this, Sando once again takes Loonie to Java without Bruce.

Sando’s betrayal eventually paves the way for the smarting Bruce to be drawn into a passionate affair with Eva. Eva’s unhappiness with her marriage and helpless situation, clubbed with Sando’s inconsiderate absence, leads her to take ruthless advantage of the teen-aged Bruce, even as she never reciprocates his feelings of love, whatsoever.

His father’s death brings about a major upheaval in the way he perceives life and puts him back on track with his education. Loneliness, remorse and a desire to recompense his mother urges him back to studies like never before.

The story ends years later, long after Bruce separates from his wife Grace. He keeps in touch with his daughters, meeting up with them for occasional bouts of surfing. There is a touch of poignancy in the way the paramedic Bruce,  remains an enigma to everyone who knows him, including his own daughters, and the only time he feels liberated is when he is out doing something ‘completely pointless and beautiful’ like surfing at sea.

The whole book can be summed up in one word: Retrospection.

The nostalgic tone is set in the first chapter itself, which begins with a hook of a suicide for the reader and rapidly moves into an internal probing of the past by the main protagonist, Bruce Pike.

The story of how two teenage boys begin to learn their surfing with ‘Coolites’, boxy Styrofoam boards and eventually traverse phenomenal surfing journeys across some of the most dangerous waters is thrilling one.

The dangerous games that the boys play, just for the thrill of it, keeps the reader on edge. The vivid descriptions capture the plethora of feelings of a surfer battling the waves, with brilliant finesse.

The strong contrast between the thrill of fast paced life in a larger town and the intense boredom in the ‘sloth’ of a small town as perceived by Bruce is palpable. In fact, Bruce refers to his parents as ‘old people’ and makes more than one reference to the disinterested singularity of townsfolk ‘pottering’ around their town.

The phenomenal influence of an adult figure on teenage boys is brought out with flair and detail. The deep hero-worship of the boys, who vie with each other for one-upmanship with Sando showcases the typical, albeit sad jealousies, of the teenage years.

One may easily fault Sando for wielding an influence that repeatedly puts the boys’ life in danger, to satisfy his own requisite for revival of a lost youth. However, the impact does bring out hidden, latent skills and teaches the boys to overcome their fears, to go from strength to strength along the story.

The fact that Bruce dreams of drowning during his bouts of Pneumonia point to a deep rooted fear in his psyche. Hence the title 'Breath' is a perfect complement that sets the tone of the whole book.

The metaphors are mind-blowing, the similes are pure genius. The fury of the ruthless sea and thrill of a surfer’s life, lived in mere seconds of playing with danger, are showcased with aplomb.

The typical puppy love of a teenager for an adult woman is demonstrated with clarity, even in the retrospective mood of the narrative. The trauma of a kid forced into what he deems unnatural, is tangible. Bruce hates what he is forced to do by Eva and yet, unable to refrain from giving in to her. His panic when she stops breathing is palpable. The irony is profound, that for a boy who is addicted to the dangers of the ocean, a boy who playfully holds his breath underwater for a mere game,  is terrified of death by asphyxiation in the entrapment-equipment of the bedroom.

Bruce’s sexual attraction to Eva’s pregnant state comes as a surprise. And again, the irony of his wife Grace perceiving it as an unnatural tendency, even ‘grotesque’ as she words it, is thought provoking.

The book reveals to what extent a man is forced to conceal hold back his real feelings. The compelling need to veil inner thoughts, turmoils and perhaps, natural tendencies, even from his own family, in a bid to appear ‘normal’ is food for thought. In a world that harps on ‘communication, this is an eye-opener that emphasizes how difficult it is, especially for a man, to ‘communicate’.

It changed things between us in ways that we could neither foresee nor understand.

He was real enough but less of a friend than I'd imagined.

And I didn’t know whether to feel honored or angry that he might expect us to attempt it with him.

Fear’s natural, mate, said Sando. There’s no shame in it.

Being afraid, said Sando. Proves that you are alive and awake.

Animals react out of instinct. Sando continued. Like they are always on automatic. We’e got plenty of that too. But our minds complicate things, slow us down. We’re always calculating the odds, measuring the circumstances. But you can train your mind to live with fear and deal with the anticipation.

It transpired that I was not, after all, immune to a dare.

While my lungs turn into sponge and the ocean inside me flickers with cruel light. Drowning. Drowning. Fighting it. But Drowning.

For weeks I smarted with a feeling of having been overlooked, forsaken, unchosen – and the shock of it was all the greater because of how much I’d lately come to imagine an advantage over Loonie.

For the first time in my life, I was not so much solitary as plain lonely.

Yet, we had some things in common, Eva and I.

There was something careless about her that I mistook for courage in the same way I misread Sando’s vanity as wisdom.

Life was too short for rules and obligations.

Given my time over, I would not do it all again.

People talk such a storm of crap about the things they’ve done, had done to them.

She had no business doing what she did, but I’m through hating and blaming. People are fools, not monsters.

Listen, she said as though offering me a lifeline. I have a game we can play.

So you prefer revulsion to reverence.

How do you explain the sense of being made to feel improper?